Mgahinga Gorilla National Park is located in the south western part of Uganda which was established in order to protect the mountain gorillas which were continuously poached by the locals because they were seen as a threat to their security. The park is a home to over 180 bird species and a home to the endangered primate species the golden monkeys and the Uganda mountain gorillas and also the Batwa people who are the smallest group of indigenous people in Uganda whose culture is quite interesting once visited and understood because they depend on forest resources which are quite interesting. 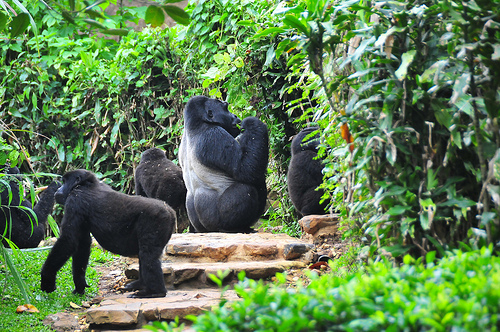 The park is just 510 kilometers from Kampala city the capital of Uganda and this takes tourists a maximum of 10 hours while on road but this is not exhausting because of the good transport systems which make it easy for tourists to access the park. Tourists using road transport will us. The guide will drive from Kampala to Kabale which is about 434 kilometers and then from Kabale to Kisoro where the park is found which is about 76 kilometers to the park.

Through Kisoro different attractions on your way to the park can be seen for example the hilly areas of the region, the deepest lake in Uganda lake Bunyonyi can also be seen which will offer incredible experiences to the tourists. By air, tourist can fly from Entebbe international airport to Kisoro airfield which takes a few hours for tourists to access the pack making it easy for tourists to access the park

Mgahinga gorilla national park is home to a number of endangered gorilla species in Uganda and also home to three of the Virunga Mountains. Visiting the park will be an interesting experience for you. The park has a number of attractions for tourists to see like the rich landscape including the mountains, it also has a number of diverse bird and animal species that can be seen once it is visited.

Wildlife: Mgahinga gorilla national park has attracted many tourists on their Uganda tour to visit it because of the number of interesting wildlife that can be seen and most of the attractions have designed activities tourists can participate in order to make their Mgahinga Gorilla National Park tour quite memorable to them.

Other animal species that can be seen during the mgahinga gorilla national park  tour include giant forest hogs, bush pigs, forest buffaloes, elephants, bushbucks, golden cats, side-striped jackals, black-fronted duikers and South African porcupines which can be seen while on their tour of the park these are usually seen in the dense vegetation of the park.

Gorillas: Gorillas in Mgahinga Gorilla National Park are the most famous attractions in the area which attract tourists from all over the world to come and see them and just in Bwindi impenetrable national park, gorilla trekking is also carried out in order for tourists to understand the gorillas and to find out how they live in their natural habitats. In Mgahinga Gorilla National Park, there is one habituated gorilla group that tourists can trek which is known as the Nyakagezi gorilla group which is quite interesting once visited.

The group is found in the south western part of the park and usually, it is found in the Nyakagezi region of the park with plenty of food for the gorillas thus the evolution of their name. The gorilla group is composed of 9 family members including baby gorillas who were given names for example; the group was once dominated by a silverback known as Bugingo who was overthrown by Mark who is now the leader of the group, however interesting about the gorilla group is the fact that after Bugingo who is estimated to be 54 years was overthrown he did not abandon the family like other defeated gorillas do or go in search for other females to make another gorilla group, Bugingo didn’t leave the group in fact he stayed within the same group and they are able to live harmoniously with no conflicts among each other.

Virunga Mountains: These include

Gorilla trekking: Trekking the Nyakagezi gorilla group is amazing and quite easy as compared to other gorilla groups in Uganda, this is because it is found in the lower altitude which is not the case for other gorilla groups in Bwindi impenetrable National park. During gorilla trekking, tourists are able to see a number of tourist attractions like the golden monkeys during the trek but for one to participate in the activity. They should first book their permits at the Uganda wildlife headquarters at the park within 24 hours to confirm.

This is because of their mobile nature of crossing to different countries that is Rwanda and the Democratic Republic of Congo however recently the gorillas have settled and made Mgahinga Gorilla National Park as their permanent home making it easy to track.

The activity takes a whole day and once the gorillas are located, they are able to spend an hour with them in order to understand their behavior in the wild, tourists will be able to see the grooming patterns of the gorillas, feeding habits and many more which can be a rewarding experience for them.

Golden monkey habituation: The endangered primates are only habituated in mgahinga gorilla national park in Africa which gives a chance for tourists in different parts of the world to come and participate in the activity in order to understand the endangered primates while in their natural habitat. The monkeys can be found in the bamboo trees on the slopes of the Virunga Mountains on the Ugandan side that is mountain sabyinyo, Gahinga, and Muhabura. Just like the gorillas in Uganda, there is a limitation of the number of people that visit a particular golden monkey group that is to say a maximum of 6 people should visit the group. Tourists interested in carrying out the activity should put in mind dressing appropriately and put on the necessary gear for it. Since it involves hiking, hiking boots and long sleeved trousers and shirts should be worn to avoid insect bites and being scratched by trees.

Birding: The park is home to over 180 bird species that attract bird lovers while on their trip. There are a number of bird species that can be seen as the tourists visit the park for instance; Ibis, Pin-tailed Whydah, Speckled Mousebird, Stone Chat, Grey-capped Warbler, Wax Bills, Yellow-vented Bulbul, Firefinch, White-naped Raven, Black Kite, Rwenzori Turaco, Blue-headed Coucal, Paradise Flycatcher, Rwenzori Batis, Double-collared Sunbird, Rwenzori Nightjar. All of which can be seen in their Mgahinga gorilla national park.

Batwa trail: The Batwa people are an indigenous group of people that tourists should not miss out on visiting while on their tour. The Batwa were also known as the pygmies are an interesting group of social individuals that mainly survive on forest resources, for example, honey, mushrooms vegetables and so much more.

The Batwa were mainly hunters who used to hunt forest animals but with the gazetting of the park, then they resulted in growing a few crops for their consumption and survival. The Batwa are mainly pygmies whose heights don’t go beyond 4 feet making them the short.

Once tourists visit the Batwa as their activity in the park, they will enjoy cultural dances, seeing their architectural designs which involve the construction of houses using tree branches and leaves which are usually semi-permanent because they usually move around looking for food. this will be an exciting experience once visited.

Virunga Mountains hike: Uganda is blessed to share three of the 8 Virunga mountains with Rwanda that is mountains: Muhabura, Gahinga, and Sabyinyo all of which offer different experiences and challenges once hiked mountain sabyinyo offers good birding experience for birders because of a number of bird species that can be seen once hiked different monkey species like the black and white colobus monkeys can be seen in the bamboo trees of the mountain.