Buhanga Eco Park in Rwanda : This is a small forest of around 31 hectares that is referred to as sacred, and a ritual place where the Kings of Yore in Rwanda were initiated and enthroned for Kingship. It really brings out great beauty of an ecosystem and it’s quite exhausting as you get into the forest walking on stony trails under the covering of tall majestic trees as well as creeping and crawling plants as you are ushered in by beautiful colourful butterflies and various bird species singing in the air. 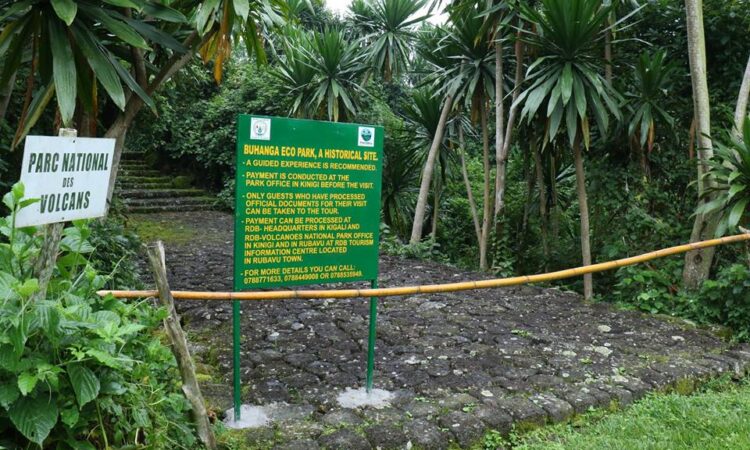 The forest takes on different dimensions depending on the weather conditions, season of the year and the time of the day, but however it’s more appropriate to visit the forest in the early morning hours and in the afternoon hours the time at which the birds are actively singing in the air making your hike through the forest more interesting and lovable. The forest has different sections and each section has a different story concerning the initiation of the Kings and the traditions of the Yore people in Rwanda and therefore you will visit them differently and first of all you will encounter with the following when you visit Buhanga Eco Park.

This small ditch is the place where the King’s assistants, known as the Abiru in Kinyarwanda, picked herbs that would be added into spring water for the King to take a ritual bath as part of the processes of the King’s coronation. The reason of adding the herbs in the water was to cleanse it before the King takes his shower. The ditch is surrounded by small lava stones and a flowery thicket. After discovering the value of the small ditch, you will then walk down to;

This cave is surrounded by huge boulders and it’s the place where the King was wheeled in the Royal carriage, referred to as “Ingobyi”, right from his place in Nyanza without making any stop on the way. In the dark cave, is where the King made his first stop in order to take his bath with the spring water mixed with the herbs collected from the small ditch, known as a fortune bestowing bath, referred to as “Kwihagira” in Kinyarwanda. After bathing, the King was immediately thoroughly wiped and was then smeared with regal oil and after this, the King was then carried to the conference podium.

This is the place where the King received his Kingship instruments that he would use while in power, as well as blessings and protection from the gods. And after this, he was immediately officially titled as “Umwami” of Rwanda. The Ceremony was then presided over by his advisory council, clan heads, royal sorcerers and the elders. This ceremony, according to their ancient cultural beliefs, ensured the immunity of his Kingdom from external aggression and it also made invasions of other territories by the Kingdom a success.

The conference podium is made out of perfectly cut lava rocks with stairs on the edge and it’s covered in greenish mold. After here, you will then be guided to another amazing site where you will find the three-in-one tree.

According to the people of Rwanda, the Three-in-one tree represented the harmony and unity of the three Rwandan ethnic groups who served the King loyally.

The three-in-one tree, referred to as “Inyabutatu” by the Banyarwanda, the local people of Rwanda was as a result of three different tree species; the Inigabiro, Igihondondo, and Umusando being intertwined forming a three-in-one-tree.

In the same place, you will also see the outstanding Umuvumu which is known as “the curse.” The reason as to why it is referred to as a curse by the Banyarwanda, is because it is said that one day a number of about thirty local men cut it down for firewood but before they carried the wood, it turn back into the original tree, and that the next day, these men and their families all perished.

You will then walk down to a small spring containing dark cold water, cold like ice from which the King’s water that he used for bathing was withdrawn. It is said that in 1988, the local chief ordered his men to dredge this spring, but before night, the spring was over flowing with water again and that the next day, a number of huge snakes resided at the local chief’s place for seven days and on the eighth day, him and his family died.

Another mysterious thing about this spring is that it overflows in the dry season and when it comes to the wet season, it almost dries up. This spring provides water for domestic use to the local people and it is said that hundreds of people go to this spring to seek blessings.

The Buhanga Eco Park entrance fee is only $40 for foreigners and 2000 Rwanda francs for the citizens of Rwanda and it’s open throughout the week from 8:00am to 6:00pm. This is one of the great place to visit after your gorilla tours or wildlife safaris in Rwanda