4 Days Akagera national park Safaris : Akagera national park was gazetted as a national park to protect the ecosystem and wildlife in 1934 in the Eastern park of Rwanda closer to the Rwanda-Tanzania border and it covers an area of about 2,500 square kilometres. During the restoration of peace in Rwanda in the 1990s after the outbreak of the Genocide in 1994, most people settled around the park and cut down the forest for timber and consuming of savannah animals. Most of the animals were hunted including the lions, rhinos and other park’s wildlife was displaced by long horned cattle. Hence the park’s diversity was destroyed to a point of not existing at all; this makes the history of the Akagera national park even more remarkable. 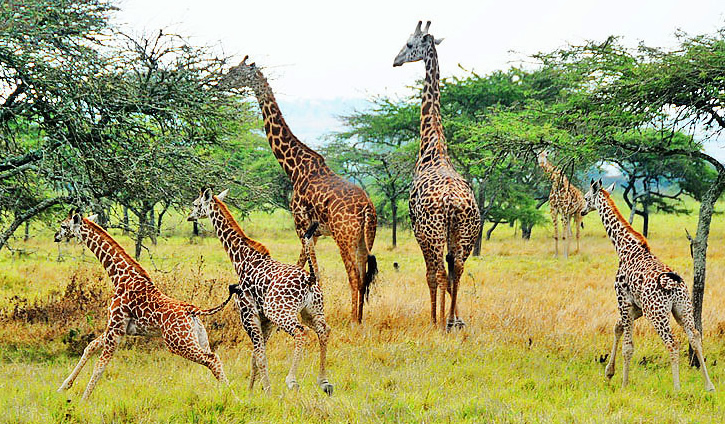 Akagera national park was named after River Kagera which is also known to be Alexandra Nile given that it forms part of the upper headwaters if the Nile carrying water from distant sources. It flows along the Rwanda-Tanzania border feeding into Ihema and other lakes. Akagere National Park has a complex blend of landscapes, vegetation and animals including the savannah landscape of acacia, open grasslands and woodland, bushes, lakes and swamps. Enjoy remarkable game drives for animals such as Buffaloes, Antelopes, Elephants, Giraffes, Leopards, Hyenas, lions, rhinos to mention a few. Other excursions include Kigali city tour will offer you more understanding of Rwanda and its history and beauty

Upon arrival at Kigali international airport with your morning confirmed booked flight or Depending on your location in Kigali, you will be met by your safari driver who will be your guide for a city tour experience. You will then head and visit Kigali genocide memorial ground were over 250000 victims of Kigali genocide were laid to rest before you will drive south of Kigali heading to Ntarama and Nyamata genocide memorial sites which is roughly a 45 minutes’ drive. These two sites will give you a great picture of the entire genocide incidence. As you will be able to get fresh information about how the entire genocide started. Ntarama’s former Catholic Church is now a memorial site. 5,000 people were massacred there on 15 August 1994 during the Rwanda Genocide. This memorial center is one of six major centers’ in Rwanda that commemorates the Rwanda Genocide. You will later head to visit Nyamata and its surrounding region suffered some of the most extensive devastation, horrifying violence that took place in 1994 against the Tutsi and moderate Hutus.

This is a placed believed as the starting point of genocide in 1994 and over 10,000 of victims were believed to be killed in a catholic church. After visiting Nyamata memorial site, you will proceed for lunch before driving, Bugesera Reconciliation Village, Mbyo Reconciliation Village is where perpetrators and victims, murderers and survivors, Hutus and Tutsis, are neighbors, having intermarried one another and trying to live in harmony, after return from prison after 9 years of imprisonment, and they had no place to go, and the government had to build the reconciliation village with partnership with some NGO’s to see these victims can have a home, after asking for forgiveness from the families they harmed.

Acquire a proper sense of the place through actively engagement in different activities ranging from agricultural related to interaction with locals, acquiring cooking and weaving lessons from locals and listening to some testimonies from one of the community members in a reconciliation village. The stories are still fresh on these people’s mind, that you will almost shade tears, as you listen and relate the past situation. Never should this happen again. You will later drive back to Kigali with an authentic experience of the real genocide situation after listening to number of the stories with its impact that can be vividly observed.

After breakfast, set off to Akagera national park, its 2-3 hours’ drive, arrive at the park, and proceed to check-in your lodge, have lunch and enjoy an evening game drive. Before nightfall, return to your lodge for dinner and overnight stay Ruzizi tented camp for luxury option/Akagera game lodge for mid-range option/Dereva hotel for budget option

After a morning breakfast, you will embark on your morning game drive around the park for a rewarding wildlife views. Expect to encounter the Big five including the Lions, elephants, buffaloes, leopards, cape buffaloes and the recently introduced Rhinos along with other animals including; giraffes, warthogs, waterbucks, zebras, hyenas and different antelope species. Expect to also see over 500 species of birds. The game drive may last for about 3-4 hours. Return to lodge for lunch and relax as you wait for the next activity.

In the afternoon, the driver will pick up for a boat cruise on Lake Ihema-the second largest lake in Rwanda after Lake Kivu. The boat trip exposes you to plenty of wildlife on the lake shores which come to cool off and drink water including hippos, buffaloes, huge crocodiles and birds such as malachite kingfisher and fish eagle. After the amazing boat trip, return to your lodge for dinner and overnight stay at lodge as above

After breakfast, check-out of the lodge and transfer back to Kigali. Upon arrival in Kigali, have lunch and proceed to Kigali airport for your onward flight back home. End of safari