A tribute to Nandi – Female Rhino at Ziwa Rhino Sanctuary

A tribute to Nandi – Female Rhino at Ziwa Rhino Sanctuary: Rhinos are some of the critically endangered animals in the wild because of several reasons like habitat destruction, disease and majorly because of being hunted down by humans for their horns. It’s for that reason that Rhino conservation programs are of major importance in most parts of Africa including Uganda. 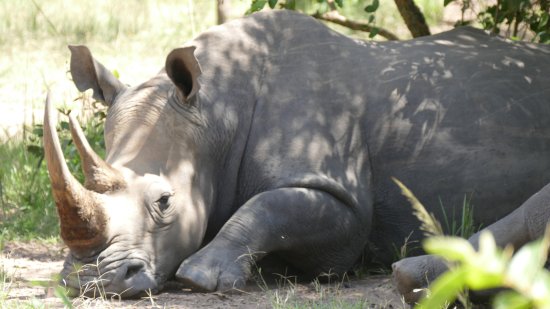 Sadly on the 28th February 2021, Nandi a female Rhino at Ziwa Rhino Sanctuary succumbed to a rare disease yet to be named by the wildlife scientists.

Nandi was one of the many females rhinos at the Sanctuary and it is said the she – Nandi started showing signs of this rare disease in late 2020 and the signs included reduced physical activity, loss of appetite and weight, general disconnect  from other rhinos among other signs.

At the time Nandi caught this disease, she was also expecting her 7th calf and when the authorities noticed has condition they immediately engaged the Uganda Wildlife Authority veterinary doctors who treated Nandi on several occasions to help her get better from this unprecedented disease.

As Nandi’s condition worsened the UWA doctors also solicited support from other rhino experts who joined forces to investigate the kind of disease Nandi was suffering so that they could treat it right and help her get better.

Unfortunately though lots of efforts were put into saving Nandi’s life she did not survive this disease and died a young age of 21 years.

In her 21 years Nandi had mothered seven calves of which some calves had gone on to mother other calves making her both a mother and grandmother. Nandi had birthed her last calf in late 2020 but the calf did not live long because Nandi couldn’t care for it in her weakened condition, so the calf died at infancy.

Nandi had lived in Uganda at the Ziwa Rhino sanctuary for 15 years, having originally been in the Disney Animal Kingdom in Florida USA where she was born and lived for her early years; before she was donated to Uganda’s Ziwa Rhino Sanctuary.

Before Nandi was buried, several samples were taken from her and sent to different pathology facilities including makerere for further investigations on the cause of Nandi’s death and the exact disease that she had suffered.

The Ziwa Rhino Sanctuary in Nakasongola about 170km from Uganda’s Capital Kampala and is the only Rhino sanctuary in Uganda and the only place you will find Rhinos in Uganda. The sanctuary currently shelters 33 Rhinos after the death of Nandi and her last born calf.

The Ziwa Rhino Sanctuary that sits on 70 square Kilometres is a serene assortment of vegetation that includes lash grass, trees, bushy grasslands and many more. The unique make-up of the Ziwa Rhinos sanctuary, offers a great habitat for the critically endangered white Rhinos.

The Ziwa Rhino sanctuary was established in 2002 to conserve white rhinos after the last black rhino in Uganda died in 1982. At its establishment white rhinos were donated to the sanctuary by Kenya, the European Union and Disney world. In total Uganda received 6 Rhinos in donations that commenced the reintroduction of rhinos to Uganda and since then the number of rhinos in Uganda have grown to 33 that are currently sheltered at the Ziwa Rhino sanctuary.

The sanctuary is also home to other wildlife and several that include leopards, kobs, waterbucks etc for animals, shoebill stork, Grey Kestrel, Heuglin’s Francolin, Marico Sunbird, Nubian Woodpecker etc for the birds.

On your visit to the Ziwa Rhino sanctuary you will be sure to engage in activities like Rhino trekking, bird watching, animal nature walks, shoebill canoe rides and many other activities.