Activities in Ziwa Rhino Sanctuary: Ziwa Rhino Sanctuary in Nakasongola district is the only Rhino habitat in Uganda located along Kampala-Gulu highway about 176 km from Kampala city. The sanctuary that sits on 70 sq kilometres of land has an assortment of vegetation that includes bushy grass, acacia woods and savannah grass. The sanctuary also has river paths that go through the area’s plains where the animals quench their thirsty. 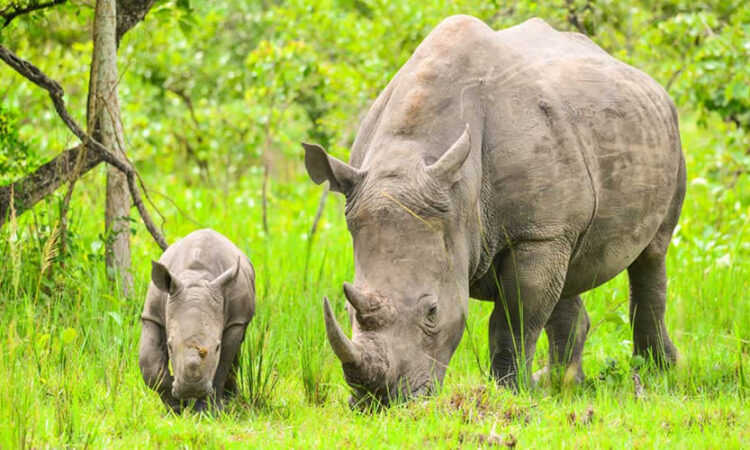 The Ziwa Rhino Sanctuary was gazetted and established in 2002, when the country received white rhinos in form of donations from Disney world park, the European Union and later on from Kenya. By the time of the sanctuary’s establishment, Uganda’s original rhino population had been extinct since 1982. Uganda was previously famous for being a home to good population of the black rhinos but because of several factors that include poaching of the rhinos, rhino habitat encroachments by the humans, diseases and many other things the rhino populations kept declining until it was no more.

The Ziwa Rhino Sanctuary is currently home to 33 white rhinos and several other animals that include but not limited to zebras, impalas, warthogs, topis, antelopes, waterbucks, bushbucks, duikers, kobs and many more. A visit to the sanctuary will give you an opportunity to experience these huge rhinos and other amazing things in a variety of activities that include but not limited to:-

Guided Wild Nature walks are walks you take through the sanctuary’s savannah to enjoy the beauty of the vegetation and the entire ecosystem that includes but not limited to animals, birds and many other things.

These nature walks are the best for sighting the other animals that stay in the sanctuary because you’re not trekking rhinos so you will walk on routes with other animals. Also since they are guided wild nature walks, you will have an opportunity to learn more about the sanctuary, the history, the conservation programs and the surrounding communities through the tour guide.

The Ziwa Rhino Sanctuary is home to over 300 bird species that include grey crowned cranes Red-headed Bluebill, shoebill stork, Red-headed Malimbe, Namaqua Dove, Grey Kestrel, Heuglin’s Francolin and many more. On your visit to the Ziwa Rhino Sanctuary you can have an opportunity to see all these birds and more on a bird-watching spree through the woods and swampy areas of the sanctuary.

The canoe rides are operated under the community conservation partnership between the Ziwa Rhino Sanctuary and the surrounding communities to ensure that the wild life within the sanctuary is continuously protected; thus all shoebill canoe ride services are offered by the community at a moderate fee.

The fees paid for the shoebill canoe ride go far in bettering the lives of the surrounding communities and supporting the enforcement of several wildlife conservation activities and programs in and around the Ziwa Rhino Sanctuary.