The African Elephant is grouped among the big five animals in the wild, its the Largest in size of Africa’s big five but also the largest land animal weighing about 6000-7500 Kgs or more.  The Elephant exists mostly in the savanna parts of the sub- Sahara and lives in the savanna grasslands though can adapt to any environment easily including deserts and wetlands; there also a few elephants known to live in forests called forest Elephants. 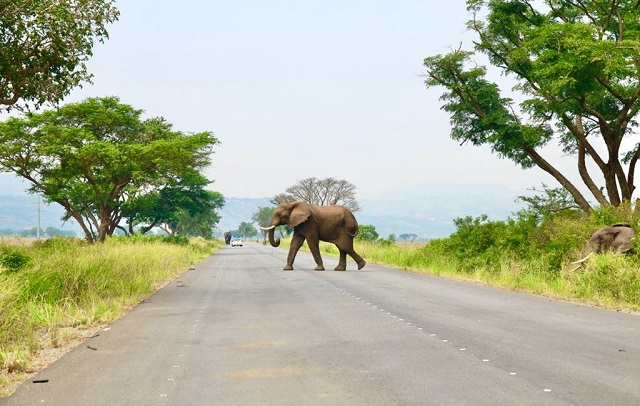 The most eminent features on the Elephant are:-

The Elephant lives in matriarch led groups called herbs of about 100 individuals that have mothers, daughters, sisters and aunts and the male Elephants live alone out of the herd as solitary bulls.

The elephants communicate using low frequency distinct rumbles that can travel over a distance of 6 miles.

Elephants are herbivores so they eat grass, tree leaves, twigs and any other vegetation; they use their trunks to bring up food and water to their mouth. In a day an elephant can eat up 600 pounds of food and about 50 gallons taking between 12-18 hours on feeding alone. Not surprised it comes with the size, Uganda Tours.

Since elephants are matriarchal, their mating period with the bulls is normally short, when a female meets a male they rub each other on their bodies, stroke each other with their trunks and then the male will mount the female and that’s it. The female goes on to become pregnant, carrying the calves in the womb for the longest time which is between 640-660 days. This makes the elephant the mammal with the longest gestation period. Baby Elephants breast feed until they are four or five years and at age 10 or 12, the males leave the herd to go create their own, the females stay in the herd through their lifetime.

Elephants can have about 5-6 claves in their lifetime and though they don’t mate for life, females normally choose to mate with the same bull through life and some bulls are protective of their females.

Observers have documented cases of bulls have sexual activities with themselves because of lack of females to mate with.

In times of danger, the mother elephant with surround the calves to protect them from danger or the calf will hold on to the mother’s tail to keep up as they run from danger.

On a normal day the Elephant is chill and calm but when not disturbed or threatened can get pretty terrifying as it flaps its ears, trumpets loudly and aggressively runs towards the culprit. Though it’s a huge animal the elephant runs at a speed of 25kph and cannot be out run by a human so it’s advised not to disturb or threaten an elephant, just leave them in their peace.

Give yourself the opportunity to see the largest animal in the big five and the wild when you visit any of these parks:-

And many others in the East African region.