The African Rhino is second to the elephant in size among the big five Animals and also the second largest land mammal in the world. It’s categorized into two types, the black and white Rhino; which however has nothing to do with its skin color but rather with its lip shape; the black Rhino has a hooked lip while the white Rhino has a square lip. 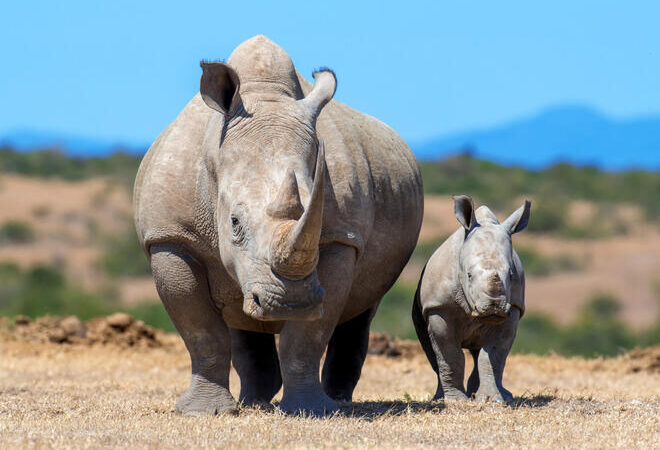 The name white came from the Afrikaans word “weit” which was used to refer to the white Rhino’s muzzle and black was given to the black Rhino as the opposite of white.

These huge mammals live in densely vegetated grasslands because they are herbivorous and are loners that like to wonder in unhindered and undisturbed areas of their habitats. The Rhinos together in a group are called Crash.

Black Rhinos browse for food with their hooked lips well as the white Rhinos graze for food walking with their head and squared lip lowered to the ground. Black rhino feed mostly at night and during the dawn and dusk hours, during the day they take cover by lying in the shade.

Rhino reproduction is quite slow, females give birth to one calf at a time though some can have twins however it takes at least 2 -5 until a female can get pregnant and give birth again. Their gestation period is between 15 to18 months and after birth a calf lives under the mother’s care for about 3 years before it goes on to be on its own.  The females will then reach sexual maturity at 6 or 7 years of age and the males at 9 or 10 years of age.

These huge animals that weigh between 1800 to 2500 kg have a great sense of smell and hearing but with poor eyesight; as they walk they put all their weight on their toes and defend themselves with their strong horns and amour like skins.

They have no natural predators apart from humans who kill them for their horns however they easily charge at any sense of danger whether it’s a human, another animal or any harmless objects.  Though they rarely kill, a female when she senses a threat to its calf will pickle her defense mechanism snorting loudly before aggressively goring with its horns at you at a speed of 56kph; this can be fatal so Its advised in such situations for you to flee the from the Rhino. Young rhinos can however easily fall prey to big cats, crocodiles, hyenas and wild dogs, African Rhino.

Among the big five Animals  the Rhino is the most endangered species and organizations like the WWF run different programs to this endangered animal. You can also be a part of the conversation campaigns by donating to WWF, adopting a Rhino and saying no to the buying and selling of rhino horns.

Rhinos are found in South Africa, Zimbabwe, Namibia, Botswana and Zambia.  In east Africa you can find the Rhinos in Uganda and Kenya at:

You can visit any of these parks and many more during the year to have Rhino tracking experience. During this experience you get to see rhinos in their natural habitat as they go about their daily activities. You also get to appreciate the flora these animals live in, among other things. All the proceeds from Rhino tracking and viewing go toward the conservation and protection of rhinos in the regions especially in Uganda which has the least population of rhinos in the region