Akanyaru Wetlands Rwanda’s Bird Watching Gem : Birding safaris is one of the main tourist attractions in Rwanda offering bird-watching. Rwanda stands out as one of the best birding destinations in East Africa given the sheer variety of bird habitats registered in Rwanda with a few endemic bird species that can only be found in the Albertine Rift valley. Rwanda’s beauty ranges range from mountainous areas, montane forests, grasslands, plains, vast swamps, rivers, lakes and off course the rolling hills. Rwanda has good road networks with safe and clean towns. Because of her small size, it is easy to cover the country in a short time compared to Uganda or Tanzania. Birdwatching in Rwanda can be done throughout the year but some months have more favourable conditions for birding than others. Rwanda has two major rain and dry seasons. The period between December and January is considered perfect for birding in Rwanda. These months fall in the dry season and are special because thousands of migratory birds come into the country to escape the harsh winter conditions in Europe and the Arctic’s. Rwanda has about 7 main birding destinations located in 3 of her national parks including Nyungwe forest national park, Akagera national park and the Volcanoes National Park. 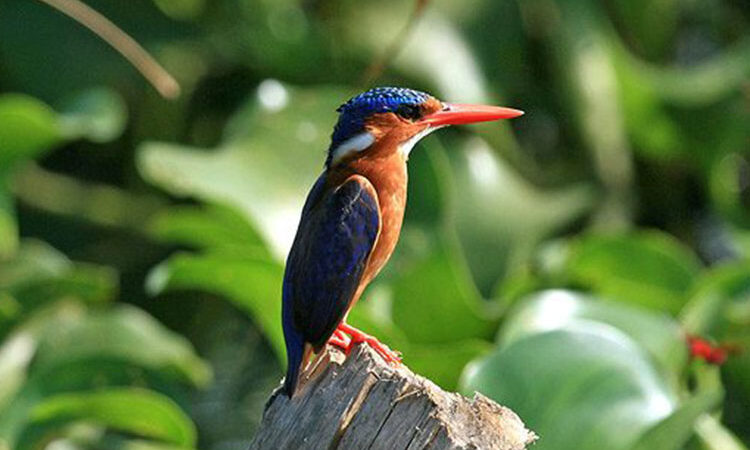 The Akanyaru wetlands are found within the southern part of Rwanda along the national borders with Burundi not far from Butare. The wetlands receive averagely 800 mm of rainfall each year. This swamp is fed by River Akanyaru and can be visited during our amazing Rwanda birding safari.

River Akanyaru is the primary tributary of River Nyabarongo, and merges in the western highlands of Burundi-Rwanda and flows east before flowing northwards along the border if these two countries and later joins River Nyabarongo. The shallows of this river are congested with various swamps that offer good habitat to different wildlife.

The Flora of Akanyaru Wetlands

The flora of these wetlands comprises of different papyrus species and other types of vegetation that offer habitat to different bird species. Some of the plant species you will see here include: Oryza barthii, Pistia stratiotes as well as Leersia hexandra, you will then see some papyrus, mixed with Miscanthidium violaceum, Typha australis as well as Cladium jamaicense; along with Echinochloa pyramidalis, Typha australis, Cyperus latifolius Miscanthidium violaceum as well as Cyperus denudatus. There are expanses of papyrus, either as pure stands or combined with shrubby vegetation.

The Akanyaru wetlands have more than 54 different bird species including a number of migrant species plus internationally threatened species like the Papyrus Gonolek, the Lesser Kestrel, Lesser Swamp Warbler, Great Snipe, Madagascar Squacco Heron as well as Pallid Harrier, in addition to one of the Guinea-Congo-Forest biome species, 3 of the Afrotropical-Highlands biome species as well as 11 species of the Lake-Victoria-Basin biome species.

Why take a bird guide on this Safari?

In order to have a successful and enjoyable birding safari, it is mandatory to have a well experienced and knowledgeable birding sites as this increases your opportunities of seeing a number of less common species. These guides are very knowledgeable of the exact places where you can go to enjoy better views of the bird species within these wetlands

You may choose to hire one of the local guides who are similarly very knowledgeable about the birds in this area. Through offering these services they are able to earn a living and that way you will be indirectly helping a Rwandan family. We as AA Safaris Ltd carefully choose our guides so be guaranteed of a great and enjoyable birding Safari during your stay in Rwanda.

Other Places to enjoy a Birding Safari

Although Rwanda is a small country, it has more than 750 species including several endemic species. And these can be seen in the different parts of the country thanks to the different habitats including swamps, Albertine Rift montane forests, lakes, rivers, wetlands as well as grassland plains plus number of grasslands up in the hills in which they thrive.

So other places to enjoy a birding safari including Nyungwe Forest, Akagera National Park, Kigali City, the Albertine Eco-region, Volcanoes National Park and several other swamps and wetlands across the country.