Akon’s visit to Uganda: Mountain gorilla trekking and Wildlife : Senegalese- American Akon this month visited the pearl of Africa Uganda. The celebrity artist famously known as Akon real names Aliaune Damala Badara Thiam was in Uganda for a four day visit with his wife Rozina Negusei; a visit trekking that was intended to acquaint them with the pearl of Africa and the business opportunities in the land. 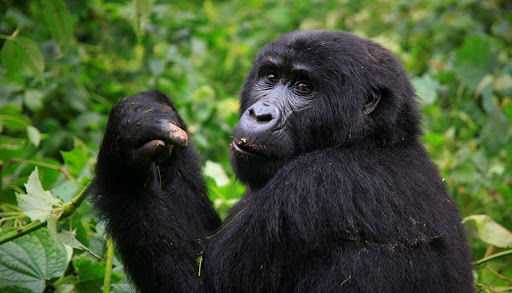 During their stay in the country the couple had the opportunity to meet the Ugandan President His excellence Yoweri Kaguta Museveni and the first lady Janet Museveni at their country home in Rwakitura, Kiruhura district in western Uganda. The couple also met a couple of government officials in the trade, business and tourism sector to discuss economic and development opportunities the couple can invest in.

In a statement the trade and investment officer in the office of the president Isaac Kigozi said that the famous singer and business mogul Akon had been designated as Uganda’s special envoy on tourism and culture and had therefore been tasked with organising an event to celebrate Africa within the African-American communities, the event will presumably be dubbed the “Uganda Cultural Festival” and will be an annual event.

From the statement it was evident that the singer was also tasked with setting up high-class luxurious accommodation facilities within the country that would promote the tourism sector in Uganda.

Akon is expected to partner with Aya Group of Companies to  on some of these projects and in setting up the proposed Aya-Akon Tower that will be somewhere in Kampala district.

So as a way to familiarise with the country the music star and business mogul together with his wife got a safari tour around the country and in this article we shall give you a glimpse of the celebrity’s safari tour in the pearl of Africa.

As the international star and his wife toured the different wildlife sights in the country they marvelled at the beauty of the land and couldn’t believe the magnificent beauty this land endowed; no wonder it’s called the pearl of Africa.

On the Safari tour Akon and his wife visited Bwindi National Park and Queen Elizabeth National Park for a primate and wildlife safari that went as detailed below.

The couple started the safari tour at Queen Elizabeth National Park where they explored the savannah plains of the park and enjoyed a variety of activities in the park. While at Queen Elizabeth National Park Akon and his wife had an opportunity to have one of those spectacular game drives through the park to enjoy the wide array of  wild animals in the park  that include but not limited to elephants, leopards, warthogs, kobs, zebras, topis, antelopes, impalas etc.

On top of the unmatchable game drive through this famous park, the couple also had a lion tracking experience in the park’s Ishasha sector where they viewed and tracked the rare and unique tree climbing lions.

The couple also enjoyed a brief park nature walk to further take in the beauty of the flora of the park and the surrounding.

After their mountain gorilla trekking experience the singer and business mogul together with his wife received trekking certificates from the Uganda wildlife Authority.

Reports from different persons who were with the couple on this safari tour; state that the couple really enjoyed their time in western Uganda and were truly amazed by the primates and the wildlife.

Queen Elizabeth National Park is one of the oldest national parks in Uganda harbouring several animal species like the lions, leopards, elephants, topis, antelopes, zebras, impalas etc. The park is also home to several birds that linger around the park’s vegetation and the kazinga channel that is known for harbouring the shoebill stork.

Bwindi National Park is a primate park, harbouring the famous mountain gorillas in four sectors of the ancient Bwindi forest.