Big 5 animals in Uganda were first called the big 5 by hunters in the olden days, and have in recent years become tourist wildlife safari delights, that every tourist having a safari in Africa, will yearn and look forward to sighting at least one of the big 5 animals. These animals are regarded as the rulers or masters of the wild, with one of them even called the king of the jungle, so sighting them on a safari is not just a reward; it’s an epic moment to the tourist, a lifetime memory and experience. 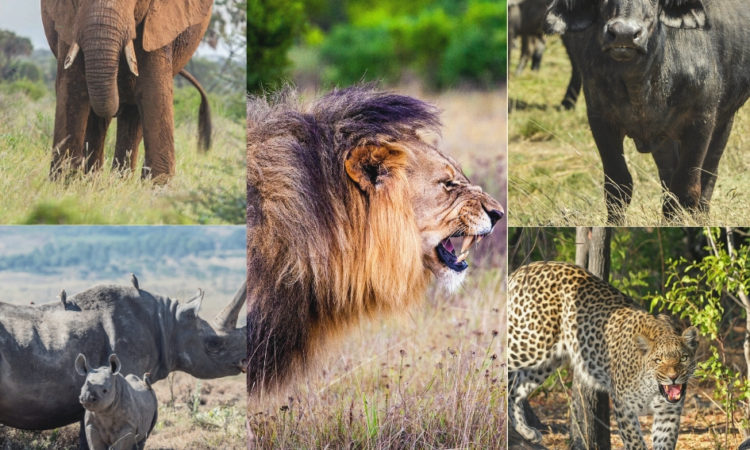 The big 5 animals were called the big five in the early days by hunters who would go out hunting for different animals in the wild however these five types of  animals were the toughest to catch on any hunting trip hence big 5 animals. These animals were known either to be elusive or to mercilessly kill their hunters before they could be hunted. This meant going for a hunting trip and capturing any of these animals would earn a hunter a prestigious accolade in their community and among his fellow hunters as a mighty warrior, hunter, and strongest man in the community among other things. Today seeing any of these animals in the wild on a game safari is the prestigious accolade for any tourist.

On a wildlife safari in Uganda, you will find these big 5 animals in most of the country’s wildlife parks and below we list the different national parks with the specific big 5 animals.

Lions in Uganda are found in Queen Elizabeth National Park, Murchison falls National Park, and Kidepo Valley National Park. On your safari in any of these parks, you will be sure to sight lions as they linger around the habitat or rest if you are having a day time game drive, during a night game drive you will see them chase after their prey or feasting on prey that has already been hunted.

Queen Elizabeth National Park is also known for the unique tree-climbing lions that are common in Isasha and can easily be seen in the wee hours of the morning in the different trees; past the wee hours of the morning its advisable to use a tracking device to sight these rare lions; tracking devices are available at the park’s offices at an extra fee.

If your interest is to see leopards, it’s advisable to take a night game drive because during the day, it’s quite hard to see these animals, they are very elusive and can easily camouflage. However at night, they are roaming around the habitat hunting for their prey so they are easily seen. Night games are done in all parks in the country and best done in Lake Mburo National Park and Kidepo Valley National Park.

Though Uganda has both black and white Rhinos, Rhinos in Uganda, in the recent years, have been nearly extinct because of several reasons but mainly habitat destruction however all hope is not lost; Rhinos in Uganda are rehabilitated and conserved at Ziwa Rhino Sanctuary which is the only place with Rhinos in the country.  The place is open to visitors all year round who wish to see the Rhinos and is just a few kilometers away from Murchison Falls National Park; meaning you can always have a rhino trekking experience either on your way to or back from Murchison falls National Park.