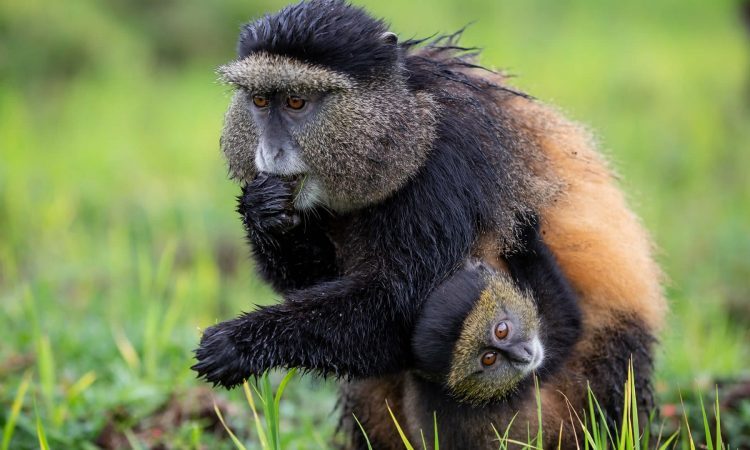 But that said golden monkeys though they don’t directly harm humans, they can destroy people’s garden when they storm them in such of food. They monkeys can eat all the leaves, and fruits in the garden and their movements in and the around the gardens can hinder the growth of the plants the people have planted. This happens especially when the golden monkey habitats are close to human communities.

On the other side golden monkeys when they are threaten by humans or any predator, they will run or jump away but if they choose to stay they will fight you by biting you and showing signs of aggression like head bobbing, yawning then jerking the head and shoulders forward. These tactics are meant to scare you away from them because realistically speaking, these golden monkeys are not the strongest creatures in the wild so they can be easily defeated by their attackers.

On the brighter side though golden monkeys are peaceful playful animals, rarely found in fights unless provoked. They live in forested areas where they find their food which includes bamboo shoots, fruits, leaves, shrubs and small insects. These monkeys like the other monkeys live in groups of up to 100 individuals. The groups are led by dominant males, who lead small groups of females and young ones within the bigger group.

Golden monkey trekking is similar to chimpanzee trekking and mountain gorillas trekking. On all the trekking experiences you go into the forest and then find the primates, spend an hour with them and exit the forest.

In the case of golden monkeys, the trekking experience will start at about 7:30am at the park headquarters, where you will be briefed about the experience. After the briefing you will then head into the forest, trek for about one or two hours and then find the monkeys. Unlike the mountain gorillas that stay so deep into the forest the golden monkeys are usually nearby so you won’t trek so long until you land on them.

When you land on them you will watch them for an hour, you will watch them play, feed, rest, move around – generally going about their usually monkey business. You will have chance to observe them, take pictures of them, ask the ranger questions about them, just enjoy the ambience and the place among other things.

After that hour you will then exit the forest, still your trek will be about an hour or two and then you will go back to the park headquarters for an after trek briefing before you can go with your other activities of the day.

Golden monkey trekking usually takes a total time of 4 to 5 hours so on occasion people combine the activity with other activities like community tours, nature walks and other things. It all depends on the country you are trekking in and the amount of time you have on your hands,