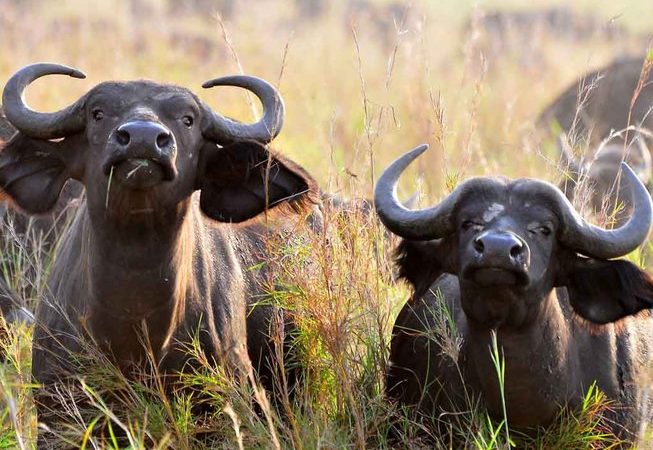 The Cape buffalo is a member of the cattle species bovini and is the only one that naturally occurs in Africa. This huge animal that weighs between 400 – 900 kilograms of course males weighing more than the females has an unpredictable, temperamental and defensive nature that it uses against its predators.

The prominent feature on these animals is the type of horns that are fussed at the base of the bull and produce a continuous bone shield across the head of the bone, this whole horn formation on a bull is called the boss. The females have smaller horns and don’t have a boss.

These strong animals are quite vengeful, they will always fight back at their predator even when the attack was days early. They use their extra good memory and good sense of smell to track their predators to exact their revenge. However their hearing and sight is very poor. The cape buffalos are good swimmers and in dry seasons have an extraordinary ability to regulate their body temperature as they wallow in mud and water.

Cape buffalos spend their lives in dense cover reeds and thickets though they can survive in almost all types of grasslands with a nearby water body or source; that’s why you always find these animals in swamps, mopane grasslands, and floodplains. These animals are heavy grazers so they keep moving to look for fertile pastures; this makes them non – territorial animals. These herbivores animals feed on only vegetation, grass, herbs and take a lot of water; they actually need water daily. In seasons of famine and food scarcity, the buffalos will browse woody vegetation for food and will try to find as much water as they can. When they feed they use their tongues and wide muzzles plus their incisors to row and eat grass quickly.

The animals live in herds that led by a dominant male, who is known as the pathfinder. The herds are made up of dominant male with a number of related females. The leadership in each herd is linear dominance where the lesser will have to submit to the lesser in age, size and strength.

Normally in a herd there can only be one dominant male leading the herd and may his offspring males that have been birthed by the females; so the other males that have come of age called subordinate males will form sub herds around the main herd and when they get a female or females of their own they move away and form their own herd. In the main herd young bulls always stay away from the dominant bull because they may easily get killed by their father.

Cape buffalos normally mate in the wet seasons, where the younger more vibrant bulls return to the main herd and scout for the females on heat and they mate with them. In scouting for females on heat the strongest bull is the one who mates with the female several times. What happens is the dominant or strongest bull identifies this female and defends her intensely from all the other bulls; when the females agree with the dominant or strongest bull, she will mate with that bull. In defending the female the bulls will but their heads using their horns. Older bulls in most cases never come to the herd in wet seasons because they are not as aggressive as the younger ones so they can’t compete for a female.

In dry seasons the males normally separate from the herds and make bachelor herds either near the main herd or outside the herd.

The females give birth every two years and have a gestation period of 11 months and when they give birth the young ones are kept in vegetation for the first weeks before they join the entire herd. As they grow the buffalos will have their horns develop at 5 – 6 years and the males will have their horn bases fully develop at 8-9 years. By 3 years the females will be mature enough and at 5 years they are able to conceive. The male are also mature by 3 years between 4 – 6 years they are able to mate with a female.

The cape buffalos especially the calves are normally preyed on by lions and crocodiles and in their defense from predators they normally stick together in a herd. When a predator comes at them, they will all gather together with the calves in the middle. Normally the bigger the herd the stronger the defense, because then it becomes hard for the predator to pick on one victim.  For these defense reasons, in areas where there are many predators a dominant bull may entertain subordinate males keeping around the herd because in time of danger they will be there to defend the herd.

Where a buffalo is alone or fewer buffalos are out alone and sense danger or a predator, a distress call will be made that will bring the rest of the herd, the herd will then corporately attack the predator harassing, trampling and killing the predator even lions.