Classification of Gorillas in Africa : The largest of the great apes, gorillas are stocky animals with broad chests and shoulders, large, human-like hands, and small eyes set into hairless faces. Gorillas are gentle giants and display many human-like behaviors and emotions, such as laughter and sadness. Gorillas share 98.3% of their genetic code with humans, making them our closest cousins after chimpanzees and bonobos. 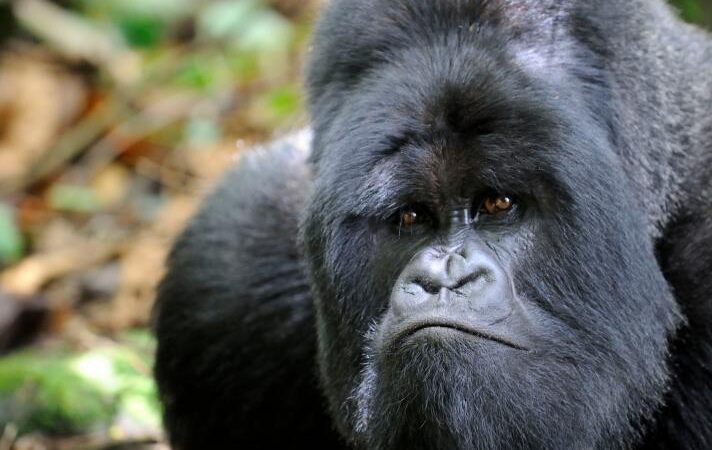 The two gorilla species live in equatorial Africa, separated by about 560 miles of Congo Basin forest. Each has lowland and upland subspecies. Gorillas live in family groups of usually five to 10, but sometimes two to more than 50, led by a dominant adult male—or silverback—who holds his position for years. The bond between the silverback and his females forms the basis of gorilla social life.

Females become sexually mature around seven or eight years old but don’t begin to breed until a couple of years later. Males mature at an even greater age. Once a female begins to breed, she’ll likely give birth to only one baby every four to six years and only three or four over her entire lifetime. This low rate of reproduction makes it difficult for gorillas to recover from population declines. Both gorilla species have been decreasing in numbers for decades.

Most authorities recognize two species and four subspecies. The western gorilla (Gorilla gorilla) is made up of two subspecies: the western lowland gorilla (G. gorilla), which inhabits the lowland rainforests from Cameroon to the Congo River, and the Cross River gorilla (G. gorilla diehli), which inhabits a small forested region along the Cross River separating Nigeria from Cameroon. The eastern gorilla (G. beringei) is also made up of two subspecies: the eastern lowland, or Grauer’s, gorilla (G. beringei graueri), of the lowland rainforests of the eastern Democratic Republic of the Congo (Kinshasa), and the mountain gorilla (G. beringei beringei), found in the montane rainforests and bamboo forests of the highland terrain north and east of Lake Kivu, near the borders of Uganda, Rwanda, and Congo (Kinshasa).

The Eastern lowland Gorilla is said to be the largest of all the species while the mountain gorilla is the most aggressive of the species thus Classification of Gorillas in Africa.

The gorilla is active during the day (diurnal) and primarily terrestrial, usually walking about on all four limbs with part of its weight supported on the knuckles of its hands. This mode of locomotion, called knuckle-walking, is shared with chimpanzees. Occasionally gorillas stand erect, mainly when displaying. Females and young climb more than males, mainly because much vegetation cannot support the weight of males.

Their diet is vegetarian; that of eastern gorillas includes leaves, stalks, and shoots, but western gorillas eat much more fruit. Gorillas generally dislike water, but in some areas, such as the Sangha-Ndoki region on the borders of Cameroon, the Republic of the Congo (Brazzaville), and the Central African Republic, they wade waist-deep into swampy clearings to feed on aquatic plants.

Gorillas spend much of their time foraging and resting, with the group traveling a few hundred meters between several daily feeding bouts. Each group wanders through a home range of about 2–40 square km (0.77–16 square miles), though several different groups may share the same part of the forest. At dusk, each gorilla builds its own crude sleeping nest by bending branches and foliage. A new nest is built every night either on the ground or in the trees.

Mountain gorillas live in east-central Africa in just two isolated groups – one in the Virunga Volcanoes (a region spanning 3 national parks in Uganda, Rwanda, and Democratic Republic of Congo (DRC)) and one in Bwindi Impenetrable National Park, Uganda, which connects to Sarambwe Nature Reserve, DRC.

They’re found in high-altitude montane and bamboo forests, which are surrounded by agriculture and settlements. Most mountain gorillas live in stable family groups of around 10 individuals, with one dominant male and several females. Both males and females in the group care for their infants; hugging, carrying, and playing with them.

When they get older, most males and around 60% of females then leave their birth group to join another troop. This helps prevent inbreeding. In the wild gorillas can live to over 40years. Gorillas are classed as infants until they reach around three-and-a-half years old, and adults from around 8 years.

Males between 8-12 years are called ‘blackbacks’. Then from 12 years old, they develop a silver section of hair over their back and hips, earning them the name ‘silverback’.

They are one of the biggest, most powerful living creatures. An average male mountain gorilla can weigh 180kg (that’s almost 30 stone), and measure 170cm (over 5’5”) tall thus Classification of Gorillas in Africa.

Mountain gorillas spend about a quarter of their day eating mainly leaves and shoots but have also been known to eat snails, ants, and bark (a good source of sodium). At night, mountain gorilla groups sleep together in nests on the ground, or trees, that they make from foliage. Infants will share their mother’s nests, staying safe and warm.

They have 16 different types of calls. This includes short barks when they’re mildly alarmed or curious.

To intimidate rivals, male gorillas strut with stiff legs, beat their chests, and use vocalizations like roars or hoots.

Gorilla trekking is defined as a hike to the tropical forests of Africa to see the mountain gorillas in their natural habitat. In Africa, the best gorilla trekking safaris are in Uganda, Rwanda , and the Democratic Republic of Congo. Experience the magic of gorilla trekking in the tropical rain forests of Bwindi and the Virunga Mountains on one of our carefully planned gorilla tours that are offered all year round, we create magical trips to see the spectacular mountain gorillas in their natural habitat within various countries in Africa.

Western lowland gorillas can be distinguished from other gorilla subspecies by their slightly smaller size, their brown-grey coats, and auburn chests. They also have wider skulls with more pronounced brow ridges and smaller ears.

The lowland gorillas live in thick tropical rainforests, where they find plenty of food for their vegetarian diet. They eat roots, shoots, fruit, wild celery, and tree bark, and pulp.

Gorillas can climb trees, but they’re usually found on the ground in communities—known as troops—of up to 30 individuals. Troops are led by one dominant, older adult male, often called a silverback because of the swath of silver hair that adorns his otherwise dark fur. Troops also include several other young males, some females, and their offspring.

The leader organizes troop activities, such as eating, nesting in leaves, and moving about the group’s home range. Though gorillas can stand upright, they prefer traveling on all fours, pushing themselves forward with the knuckles and soles of their feet. When challenged by another male, a troop leader will demonstrate his strength by standing upright, throwing things, making aggressive charges, and pounding his huge chest while barking out powerful hoots or unleashing a roar. Despite these displays and the animals’ obvious physical power, gorillas are generally calm and nonaggressive unless they are disturbed.

Though they’re normally quiet animals, western lowland gorillas have an extensive array of vocalizations—at least 22 different hoots, barks, and screams, each with its own meaning. In captivity, gorillas have displayed significant intelligence and have even learned simple human sign language thus Classification of Gorillas in Africa.

Female gorillas give birth to one infant after a pregnancy of nearly nine months. Unlike their powerful parents, newborns are tiny—weighing about four pounds—and are capable of doing no more than clinging to their mothers’ fur. These infants ride on their mothers’ backs from the age of four months through the first two or three years of their lives. Young gorillas, from three to six years old, spend much of their day at play, climbing trees, chasing one another, and swinging from branches.

Lowland gorillas are habitually very difficult to habituate compared to mountain gorillas, however, the Democratic Republic of Congo and the Central African Republic offer the only chance to track one of the two habituated lowland gorilla groups in the world!

As with tracking mountain gorillas there is a strict distance rule when tracking the lowland gorillas of at least 7 meters. This distancing is to prevent the transfer of any human diseases which could potentially wipe out an entire gorilla family in a matter of weeks.

Gorilla trekking in this region is also limited to a maximum of 4 people at any one time. The reasons for this are to limit any stress to the gorillas and also because the vegetation is much denser and therefore it is harder to move around the gorillas group that will most likely be mobile