Cycling Safaris in Rwanda is a unique kind of tour in the country where travelers get a chance to get up close with nature so that they can explore the park’s features. Cycling is one of those engaging and exciting activities you can get to do on your safari in Rwanda. Though the country is mainly known for its primates that live in Volcanoes National Park that is mountain gorillas and golden monkeys then in Nyungwe National park chimpanzees; the country’s hilly landscape makes it a great place for cycling safaris. 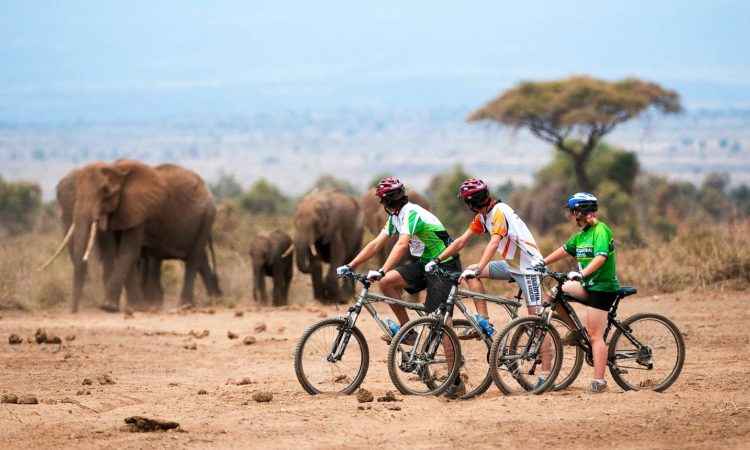 The hilly landscape makes the perfect pathways for cycling trails that create an adventure for cycles who want to prove their cycling abilities and enjoy the adrenalin rush from encountering steep climbs and slopes on their cycling sprees.

The Cycling Safaris in Rwanda take you around the magnificent hilly landscape of the country as you see the green vegetation sceneries that cover most of the country, sight the volcanoes that are a part of the virunga massif and the water bodies with fresh water and numerous birds that enhance the beauty of the water bodies.

Cycling Safaris in Rwanda takes place in the north and south of the country, northwest of Kigali city in surrounding areas of Volcanoes National Park and south west through Nyungwe National Park to Lake Kivu.  The Cycling Safaris in Rwanda take you through the numerous trails in the north and south that run through mostly hilly areas, forested areas, tea plantations and a variety of vegetation that give you an amazing green scenery as you enjoy the fresh breeze that comes from the surrounding bodies especially lake Kivu.

The most cycled route is the 227km Congo trail that starts at rubavu through Nyungwe National park along the eastern shores of Lake Kivu and ending in Rusizi. This cycling trail is quite long and takes up to 3, 5 or more days for one to cycle through the different trails to the finish; cyclers on this trail, make daily stops at camping sites as they cycle through the whole trail, to refresh and rest before they embark on the next kilometers of the cycling experiences. The campsites were set up by Rwanda Development Board so they are normally at no charge, however the camping bag and all other things needed for your camping experience, you are expected to come with them.

This several days Cycling Safaris in Rwanda should not discourage you especially if you’re not up for long cycling escapades, not fit enough to do the 227km trail or just don’t have enough time in the county, there are shorter parts of the trails that can be done in just one day, though they don’t give you the exact experience as the 3 or 5 days cycling, they give you an unforgettable experience of the lake shores and tea plantations.

Cycling in the country is done throughout the year but mostly during the dry seasons that are within the months of June, July, August, December, January, and February; July being the driest month. The cycling trails during these seasons are dry and though steep and rocky, they are not as slippery as would be during the rainy seasons that are within the months of September, October, November, March April and May.

The cycling trails in Rwanda because of its hilly landscape are quite difficulty for first time cyclers so those interested in taking on these cycling experiences are advised to be fit enough and with at least intermediate cycling skills before they can take on these trails. Cycling experience in the different areas, have different costs so if you are interested in cycling in Rwanda, consult with your tour operator on the fees of the particular cycling trail you would like to take on. Also remember for all your cycling experiences, cycling bikes are hired per a day from several bike companies in the country so plan for that; your tour operator can advise on which bike to hire depending on your preferences and budget.

more information about your Cycling Safaris in Rwanda, can be obtained from your tour operator as different trails call for different things and requirements from the cyclers.