Dian fossey tomb hike and visiting the karisoke research center : Dian Fossey was an American primatologist who known for her gorilla conservation work in the Volcanoes national park in Rwanda. Dian Fossey along with Jane Goodall and Mary Galdikas were one of the students of Dr Richard Leakey, a renowned paleo-anthropologist known for sending other passionate researchers into the wilds of Africa. Whereas Dain Fossey studied mountain gorillas, Jane Goodall focused on the chimpanzees in Tanzania while Mary Galdikas studied Orangutans. 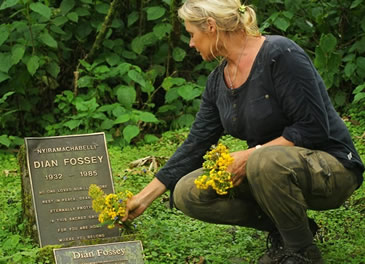 Dain Fossey was inspired by travellers who returned from Africa, who later influenced here decision in 1966 to go on tour to some parts of the African continent.  She was greatly impressed with the natural beauty and wildlife she encountered. Later, Dian Fossey picked interest in studying the history of mankind and especially evolution. Dr Richard Leakey encouraged her to study mountain gorillas. She came to Africa a second time and first settled in Virunga National Park in Congo before her final destination in the Volcanoes National Park in Rwanda. Dian Fossey set up the Karisoke Research Centre between Mount Bisoke and Mount Karisimbi. She embarked on her research work, her initial interest turned into a deep love for mountain gorillas and their overall well-being. She started studying into their biological composition and social behavior. Dian would get close to a particular gorilla group and attempt to speak to them in their own language. Eventually, the mountain gorillas trusted her and allowed her in their presence. One gorilla named Digit had a strong bond with Dian Fossey however, when Digit got killed by poachers, Fossey was deeply saddened and this forced her to focus not only on research but also on gorilla conservation and the elimination of poaching.

Dian Fossey was passionately against poaching and gorilla tourism. She claimed that the two activities were a threat to the survival of mountain gorillas because they thrived when left alone.  When the Volcanoes National Park formed in 1920, a law was set making poaching and hunting illegal in the area. However, the enforcement of this law was weak and it did not stop poachers from hunting gorillas or capturing them for sale as pets. By the time Dian Fossey arrived in the park, poaching was on the high and the overall population of mountain gorillas was at an all-time low.

Fossey channeled all her energies and resources to fight poaching and animal trafficking in the area. She sent out her staff to spy on known poachers. She would then report the poachers to the authorities and or fight them physically. When reporting and fighting the poaches proved ineffective, Dian set up the Digit Fund and through the Digit Fund, she was able to finance patrols and demolish snares that were set up in the park by poachers.  She also let the world know about mountain gorillas and how poaching was threatening their very existence. Her writings, presentations and overall efforts attracted a lot of attention worldwide hence enabling her to raise more resources to fight poaching.

Unfortunately, as she worked tirelessly to protect the mountain gorillas, she made many enemies – particularly among those who benefited from pet trade. In 1985, Dian Fossey was found murdered in her cabin bringing to an end to her 20-year old conservation work. The assailants who stormed her room have never been known. She was buried in a tomb next to her favorite gorilla Digit, Dian fossey tomb hike and visiting the karisoke research center.

Even when she is no more, Dian Fossey’s work and legacy remains intact. Several conservation bodies have been created including the Dian Fossey Fund International that has continued to support gorilla conservation works in the volcanoes and other nearby national parks.  The gorilla tourism that she frowned upon is what is helping the giant primates survive in the current era. Without gorilla trekking, there would be no resources to protect the primates. Governments and local communities would see no value in keeping the primates alive.

Dian Fossey was the first to study mountain gorillas extensively; this makes gorilla trekking in Volcanoes national park is incomplete without visiting the grave of Dian Fossey and her former Karisoke Research Center. Hiking to the Dian Fossey grave can be arranged before or after gorilla trekking. The Dian Fossey tomb hike rewards visitors with amazing views of the Volcanoes National Park and the wider Virunga ranges of mountains extending all the way to the Democratic Republic of Congo.

Mountain gorillas are wild and will avoid humans whenever they can. If one gets too close, they could charge and attack however, Dain Fossey discovered ways to habituate them by first winning the trust of the dominant silverback. During the hike, tourists get to know a lot about gorilla conservation and the work of Fossey. The Park Rangers will take you through the life of the great primatologists, her dedication and efforts to fight poaching. Dian Fossey left the comfort of life back to live in a remote and forested land up the mountains of Rwanda. It is said that without her early work of conservation, mountain gorillas would probably be extinct by now. Her story is very inspiring and visiting her tomb is a great way of paying homage. Her former Karisoke Research Center can still be seen but is now dilapidated. The Dian Fossey Tomb hike is not only about the primatologists. Participants have an opportunity to encounter some of the park creatures like Golden monkeys, giant forest hogs, elephants, antelopes, buffaloes and birds. If you are lucky, you might even encounter a gorilla group along the way.

The visit to the Dian Fossey tomb starts in the morning when everyone is at full strength. All participants get to the park offices for a comprehensive briefing about the activity. At the end of the briefing, the park Rangers proceed to the starting point, which is at the foot of Mount Bisoke. At this point, you will find porters waiting to offer help in case you have heavy cameras or bags. It is recommended that you use their services considering the length of the hike. Heavy luggage can tire you out easily and stop you from enjoying the hike. The services of a porter costs about 15 US Dollars. Do not forget to take one of the free walking sticks to help you navigate through the steep slopes, Dian fossey tomb hike and visiting the karisoke research center

After hiking for a while along the slopes of Mount Bisoke, you will find the ruins of the former Karisoke research center close to the tomb of Dian Fossey where she was buried next to her favorite gorilla Digit. The park Ranger will give a commentary about the site and its rich history. We hope you can get the famous Ranger known as Francois to accompany you. Francois worked with Fossey and now helps tourists explore the park.

After paying homage to Fossey, explore the former Karisoke Research Center, you will be led back to the starting point. In order to complete this activity, one needs to be reasonably fit because the Dian Fossey Tomb is some distance away from the park offices. The area is mountainous and can get muddy resulting in a challenging hike especially for the first time hiker. Although the Dian Fossey grave hike can be booked on the day of the hike, it is recommended that traveler so it at least 3 months in advance especially if they are planning to travel during the peak season (June, July, August, September, December and January).

The permit goes for $75. Any traveler must acquire this pass to visit the tombs of Dian Fossey. The permit can be bought at the park offices, from the Rwanda Development Board offices in Kigali or through their official website. Most travelers book the permit and tour with the help of a tour operator.

Since the hike takes half of the day, plan a 3 Days Dian Fossey hike where you will need accommodation to stay within the park before or after the hike. You can find many lodges/hotels offering budget, mid-range and luxury facilities online or through your tour operator.

You will need a car to take you to the Volcanoes National Park. The Volcanoes national park is 3 hours’ drive away from Kigali, the capital of Rwanda. Most travelers use the services of a tour operator to take them to the park.

While attending the briefing session, your passport and permit will be requested. Do not forget to move with your passport or else you might not take part in the activity like the PCR Covid 19 test that is required before the hike and Yellow fever certificate.

Hiking Boots – A long trek on a steep and inclined landscape requires specific shoes. Travelers are advised to wear shoes with great studs. They must also be waterproof to deal with the mud or rains, Dian fossey tomb hike and visiting the karisoke research center

Clothing – It is important to pack clothes, which are suitable for trekking/hiking. These clothes are normally made of polyester material, water proof and sweat resistant. The clothes should also cover your body well so that you are protected from thorns and insect bites.

Snacks and drinks: A hike to the Dian Fossey grave can be a long and strenuous activity. You may get dehydrated or get hungry as you climb up the mountain. Snacks, water and energy drinks will help you feel more comfortable.