Distance between Bwindi and Kigali.

Distance between Bwindi and Kigali, Driving time to Bwindi impenetrable National Park, depends on where you are coming from. Entebbe international Airport, is one of the major entry point to Uganda, the drive takes 9-10 hours to rich Bwindi National Park for Gorilla safari. The journey to Kigali is very awesome there is a lot to see through different regions and districts of the beautiful country Uganda. 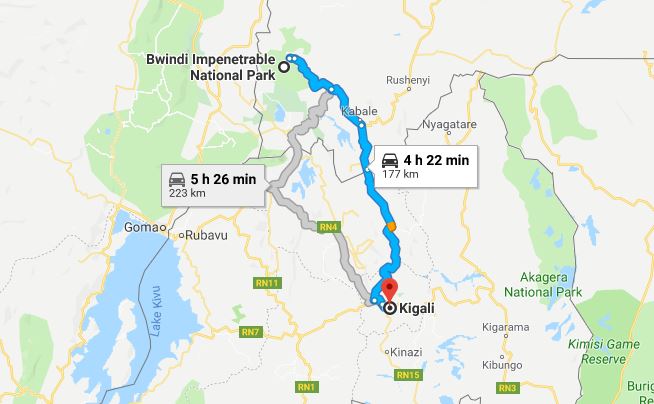 Have a stopover at the equator, roadside craft and fresh fruit shop, there beautiful sceneries of Kigezi rolling hills, changes in vegetation, escarpments and rivers this was before reaching the home of mountain Gorillas.

Kampala to Bwindi is 550 kilometers on good roads that are currently under construction.

Rukungiri town to Bwindi is a bit bumpy there is need of reducing the speeds thus spend more hours to reach the park.

Bwindi impenetrable National park is located in the south western part of Uganda; the park is a home of the mountain Gorillas in the world and also a world heritage. There other mammals, trees, and primates that can be spotted in the forest including the elephants, sitatunga, kobs, impalas, warthogs, and primates include white black monkeys, red tailed monkeys, baboons and many more.

Volcanoes National Park is a haven for the mountain