Do Mountain Gorillas Climb Trees? The question of whether mountain gorillas climb trees has always been a subject of contention among travelers but this article is about to answer your question. These Giant Apes are part of the Eastern gorilla species, together with the Eastern lowland gorillas and they mainly live in the densely forested mountain slopes ranging from 8000 to 13,123 feet above sea level. These places are marked by cold temperatures and one of these gorillas’ adaptations to living in these difficult conditions is having darker, thicker, and longer fur. 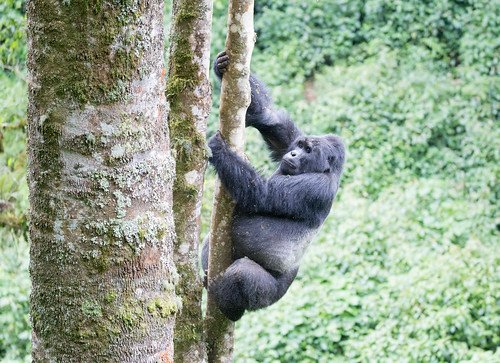 When it comes to their body size and weight, these Great Apes measure from four to six feet tall and weigh from 130 to 220 kilograms, making them the second-largest gorilla sub-species after their counterparts (the Eastern lowland gorillas). Given their huge size and body weight, anyone would wonder whether they can actually climb trees. These extraordinary primates primarily live and spend the largest time of their day on the ground, with only five to twenty percent of their day being on trees and this answers the question of whether they climb trees. Yes, mountain gorillas climb trees, although the chimpanzees spend more time on trees (forty-seven to sixty-one percent of the day) while the Orangutans spend almost all their day in trees.

Because mountain gorillas spend less time on trees, the only time they do is when they are playing (especially the infants) as well as trying to harvest fruits. Most times when they climb trees, they do it with all four limbs and rarely use their arms to swing from branch to branches like the chimpanzees and other small primate species. Interestingly, the infant mountain gorillas spend a lot more time on trees than adults, mainly for purposes of playing and this is obviously made possible by their small sizes/weight. The reason why mountain gorillas rarely climb into trees is that there are few trees in their natural habitats that are befitting for nest building as well as the fact that there are few fruiting trees within their habitats. In most cases, they hold onto tree branches and thin trunks with their hands as well as feet when climbing trees.

The western lowland gorillas (found in the tropical rainforests of Central Africa, in Gabon, Central African Republic, Cameroon, Angola, Republic of Congo, and Equatorial Guinea) spend a significant time on trees, including the adults. The adult male mountain gorillas (referred to as silverbacks) rarely move above the ground or on trees because of their immense weight, although will be found climbing up to fruiting trees as long as the branches can handle their heavyweight. It is for this reason that some silverbacks have lost their lives trying to pick fruits and the case in point here is silverback Ndahura (former head of Bitukura gorilla group) who died at 28 years in December 2016 after falling off a tree. In 2013, Ruhamuka (a 30-year old subordinate silverback of Kahungye) also sustained serious brain injuries from falling off a tree and later died.

When is the best time to see mountain gorillas?

The Mountain gorillas are found in three countries the Democratic Republic of Congo, Rwanda as well as Uganda, and can be seen throughout the year because different seasons offer different experiences. The dry season offers drier hiking trails because of little or no downpours experienced thus less challenging hikes. However, reduction or total absence of rains during the dry months-January, February, June, July, August, September, and December bring about drying of vegetation thus reduction in food quantity, for this reason, travelers will be required to move longer distances to find the mountain gorillas.

The wet season comes with heavy downpours that sometimes delay treks in addition to making hiking trails wetter, muddy, messier, and slippery thus more challenging. However, the vegetation is lusher as well as the sky is cleared of dust, thus providing better visibility and photography