Do mountain gorillas live with chimpanzees?

Do mountain gorillas live with chimpanzees? :  Yes and No! Mountain gorillas and chimpanzees are all primates of great interest; thousands of tourists visit Uganda, Rwanda and the Democratic republic of Congo all year just to get a glimpse of these primates. 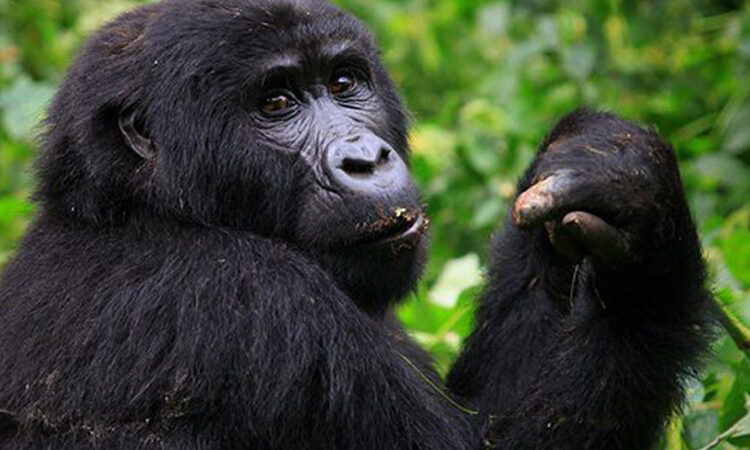 Chimpanzees and mountain gorillas are almost similar in looks and behavior, if you are not so kin you can mistake a chimpanzee for a mountain gorilla and vice versa. These apes both share about 95% of their DNA with humans and actually have lifestyles like humans.

They are both social animals living in groups or families led by a male who is in charge of all the members of the group. They are both herbivores eating leaves, fruits, shrubs and sometimes small insects. They are both intelligent animals and have great handy skills. They both have one off spring at a time and though they can perfectly stand and move on two limbs they move on four.

So technically mountain gorillas and chimpanzees don’t live together but live in similar habitats.

All these places mentioned above offer mountain gorilla trekking and chimpanzee trekking safaris respectively all throughout the year. Each country’s price for the trekking activities varies but the experiences in the different habitats are usually similar.

All trekking experiences start early with a briefing session at the park offices; during the briefing trekkers are told about the trek, what to expect and the different rules and guidelines of the trek. It’s the briefing that they are also grouped in groups of 8 for mountain gorilla trekking and 12 for chimpanzee trekking. Trekking guides or rangers are also allocated groups to take on the trek at the briefing.

After the briefing the different teams enter the forest in search of the famous primates and when they find them they will spend an hour with them, observing them from a distance of about 7 meters and after that one hour trekkers will then trek back to the park. Usually the parks give the trekkers certificates of trekking as souvenir. These trekking experience can take as short as 4 hours to as long as 9 hours depending on where you are trekking.