Forests in Uganda : Uganda is one of the handful countries in the entire world with high capability for effective conservation, sound sustainable natural forest management and attainable timber plantations. It has great potential for sustained economic growth with support from her vegetation cover. Despite her small size of only 0.02% of the world’s total dry land area, Uganda has over 11% and 7% of the known world’s total of species of birds and mammals respectively. Uganda’s forests fall into two major categories namely the natural forests and the plantations. Natural forests supply the bulk of forest products but plantations are gaining prominence. 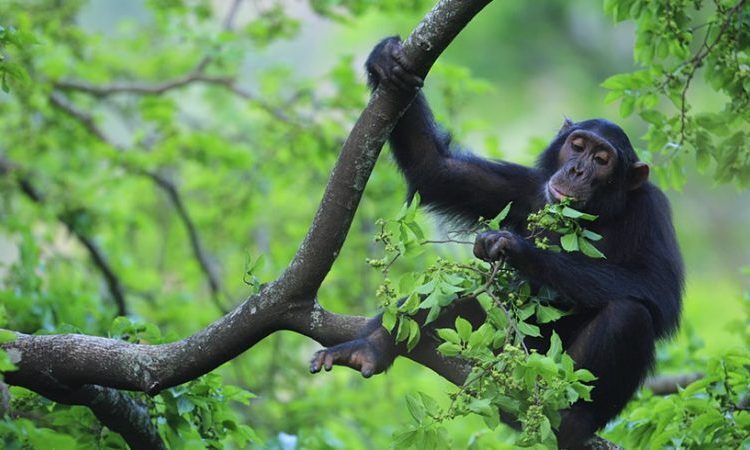 The Budongo Forest in Uganda is northwest of the capital city Kampala on the way to Murchison Falls National Park, and is located on the escarpment northeast of Lake Albert. It is renowned for its chimpanzees as well as until recently its numerous forestcover of the hardwood mvule trees that dominated the forest cap. These tress stand at about 80 to 100 m tall and over 15 metres in circumference

It is evident that continued protection odf the forest has made a difference. The rate of deforestation has reduced as well as conservation of the chimpanzees which has stepped up. However we do not take for granted the need to protect the wildlife. For the first time, a chimpanzee with albinism was observed within the Sonso community, in the Budongo Forest Reserve. The baby chimpanzee was born a couple of weeks before observation, his hair completely white and his eyes pink. Individuals with albinism are extremely rare in animals. The tropical rainforest is a beautiful place to be with a variety of life forms; plants, fungi, birds, mammals, primates and many others.

One of the best places to be in Uganda!!!Mabira Central Forest Reserve is located on the main Kampala – Jinja Highway in Mukono District. It is 54 km from the City Centre of Kampala and 26 km from Jinja Town. The Eco – Tourism Site is about half a kilometer from the road head along a short dirt road off the Najjembe trading center. The Forest is therefore accessible by all vehicles throughout the year. coverage: Mabira Central Forest Reserve is one of Uganda’s largest surviving Natural Forests covering an area of 306 sq km, Forests in Uganda.

NFA has a mandate of managing 506 Central Forest Reserves (CFR’s) totaling to 1,262,090 ha of the land cover, with objectives of improving management of the CFRs, expanding partnership arrangements, supplying forest and non-forest products and services and ensuring organizational stability. Forest cover stands at about 1.9 million hectares (ha), which is 10% of Uganda’s land cover area. The forests comprise both natural and plantations. “Natural forests” include both the tropical high forests (THF) and other naturally wooded land that falls within the definition of “forest”. Forest-based Tourism is one of the activities that the Authority views as a key contributor to its revenue generation as well as building and enhancing partnerships with the private sector, Non-Government Organisations and local communities. Ecotourism is also expected to improve on the Authority’s public image both internationally and locally.

The Bwindi Impenetrable Forest is a large primeval forest located in south-western Uganda in the Kanungu District. The Bwindi forest is on the edge of the Albertine Rift,

It comprises of about 400 varied plant species. More notably, this “impenetrable forest” in addition protects an predictable 320 population of mountain gorillas – approximately half of the population in the world, among which are a number of habituated groups, that can be tracked by visitors. Bwindi is habitat to more than half the world’s population of Mountain Gorillas. actually there are over 300 mountain gorillas living here, Forests in Uganda.

In addition to the endangered impressive mountain gorillas there are also 346 bird species and more than 200 butterfly species, about 324 species of trees, ten of which are only found in this areas in the whole of Uganda. This is really a destination to explore.

The Mpanga Central Forest Reserve is a Forest Reserve in Uganda. It is a small patch of natural equatorial rainforest covering 453 hectares (1,120 acres).[1] It is situated in Mpigi District, Mpambire, 37 km southwest of Kampala City. Onsite is Mpanga Forest Resort managed by Global Afric Safaris since 2018.

The Bugoma Forest is a protected tropical forest that is situated southwest of Hoima and northeast of Kyenjojo towns, and east of Lake Albert, in the Hoima district of western Uganda. It was gazetted in the 1930s and came under the mandate of the National Forestry Authority (NFA) in 2003. Its surface area is given as between 41,142 hectares (411.42 km2)[1] and 65,000 hectares (650 km2).

Kibale Forest in Western Uganda is also an honourable mention due to its forest cover as well as the fact that it is situated near Queen Elizabeth National Park.

It forms a wildlife corridor with the park and this dense evergreen forest is home to numerous wildlife. It is an important ecotourism and safari destination, well-known for its population of habituated chimpanzees and twelve other species of primates.

There are numerous other  forests and forest reserves in Uganda but these are the outstanding and reknown ones.