Golden Monkey Trekking is one of the top tourist Primate Safari Tour activities done in Uganda, Rwanda, and  Congo and has attracted many tourists. Primate trekking in Uganda, Rwanda and DRC is one of the most sought after tourist activity that attracts over 1000 travellers to any of the three countries each year. The most popular trekking activity done in these countries is mountain gorilla trekking however the countries have primate trekking activities that include chimpanzee trekking and golden monkey trekking. 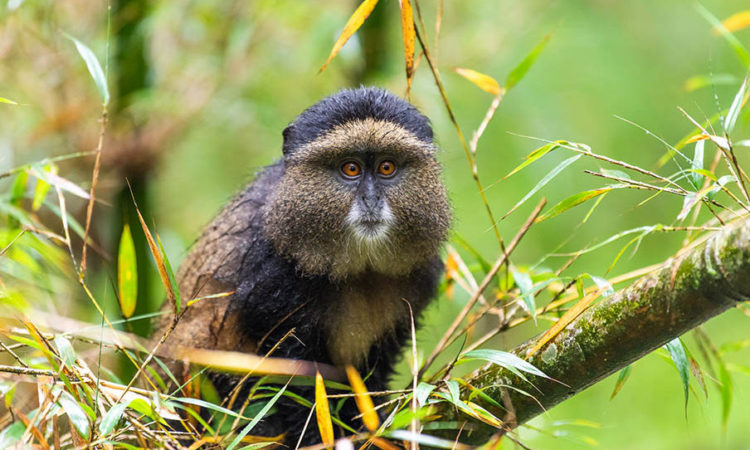 On top of the Gorilla and chimpanzee trekking, you can also do golden monkey trekking in any of the 3 countries.

Golden monkey trekking is a tourism activity that allows tourists, travellers, enthusiasts, and well-wishers to see spend time with the endangered and unique golden monkeys in their natural habitats.

Golden monkeys are the small, beautiful, rare, exceptional types of monkeys that have a distinctive golden-orange colour hence the name golden monkeys. Their golden color is really appealing and a wonder to gaze at. Though they have similar characteristics their golden color makes them stand out even as they playfully jump from tree branch to another.

Some of the golden monkeys in Uganda and Rwanda have been habituated for tourism activities so they are acquainted with human presence, they don’t run away when they see people however as stated, they are very playful and keep jumping from one tree to another, if you are not alert you may never get a good picture of them.

The permit gives you access to the golden monkeys and also cover the park entrance and ranger fees.

Also this trekking activity is not as tiresome as mountain gorilla trekking; golden monkeys don’t have new nest daily, they stay in a place for a long time so you always assured you will find them in the same spot you left them. Which means you won’t be going through the forest with rangers ahead tracking the monkeys.

The golden monkey trekking is done in the Virunga massif in the bamboo forests in Uganda’s Mgahinga National Park and Volcanoes National Park in Rwanda.

In Volcanoes National Park, Golden Monkey trekking takes about 3 to 5 hours and starts at about 7 am in the morning after a briefing session at the trekking offices.

In Mgahinga National Park the activity starts at 8 am after the briefing at 7:30 am at the trekking offices; after which you are separated into different groups and assigned your trekking rangers for the day; this activity will take about 4 to 6 hours.

This being a lighter activity than mountain gorilla trekking, children as young as 12 years are allowed to go golden monkey trekking; also as many people can trek a group of golden monkeys at the time; there is no limit to the number.

Though there is no specific limit on the number of people that can visit a golden monkey at the time, like other primates, you spend one hour with the golden monkeys when you find them.

On your trekking activity remember to carry drinking water to quench your thirst as you trek, a snack for the trek – you will definitely get hungry because of the walk, insect repellents for protecting you from insects bites. Also because you are going in the forest, put on hiking boots preferably waterproof, comfortable hiking clothes preferably long sleeved tops and bottoms; sometimes you may also need a walking stick and a porter – if you feel you need them they are available at the park/ briefing office at fee that you pay privately outside the permit cost.

Golden monkey trekking doesn’t take a whole day and is not so tiresome like gorilla and chimpanzee trekking, so you can couple it with other activities like mountain climbing, bird watching or a nature walk in the forest etc depending on your preference and choice.