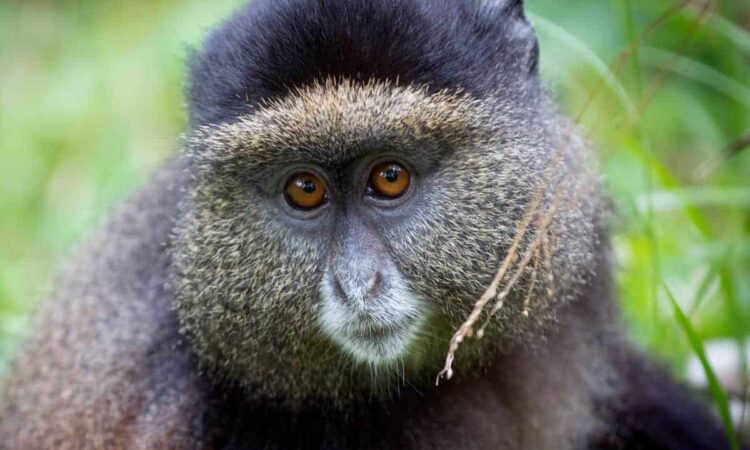 Golden monkeys are listed on the IUCN as endangered with their current population ranging between about 2000 and 4000 individuals in the wild. Like most primates the golden monkey is a social animal living in groups of about 30 – 80 members led by an alpha male. The members of the group are usually females and their children. The smaller the group the deeper it is in the forest and the larger the group the nearer to the edges of the forest it is.

The female golden monkeys in the group are usually the defendants of the group, guarding the territories and the males you are not the leaders follow their lead until they leave the group to form their own groups. Males live in the group temporarily when they are still young and leave as soon as they get the chance to.

Golden monkeys are diurnal and arboreal animals. The animals sleep in smaller groups of about 3 – 4 individuals. They have resting places in bamboo plants or similar vegetation which are also their feeding places. The monkeys eat fruits, leaves, bamboo, shrubs and small insects.

Golden monkeys communicate through expressions and unique sounds. The different sounds and expressions are used by the monkeys to signal others when there is danger, when they are happy, for the young ones when they want to play and for the males to attract female monkeys and confront danger.

Unlike for mountain gorilla permits where you need to book the permits way in advance, for golden monkey permits you can obtain them on the day you would wish to trek them. Golden monkey trekking takes about 4 to 5 hours in Rwanda and about 5 to 6 hours in Uganda. Other monkeys you will find in Uganda and Rwanda are: – De Brazza’s Monkey, Black-and-white Colobus Monkey, Red Colobus Monkey, Grey-cheeked Mangabey, L’Hoest’s Monkey, De Brazza’s Monkey, Red-tailed Monkey, Vervet Monkey, Patas Monkey and the Blue Monkey.