Gorilla Permits : A gorilla permit refers to the document issued by the governing body for the case of Uganda, it’s for Uganda Wildlife Authority that gives you timely access to the habitat of the gorillas. The permits are issued to people above the age of 15. 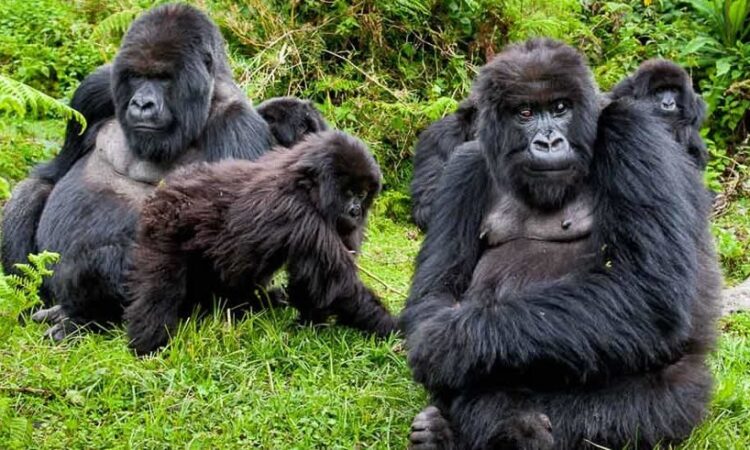 Since the dry season remains ideal for gorilla trekking, prices for the permits are usually raised because the demand is quite high. A permit could cost you USD 700 (£495 or €575) on average. However the prices could be variable depending on the origin of the tourist. As a bid to promote local tourism prices for native tourists could be cheaper than foreigners. Nationals could pay between UGX 200,000- UGX 350,000 depending on the seasons. Foreign Residents could pay between $350 -$500 while Foreign Non- residents would pay between $450-$750. While these are dependent on the season there also exist discount offers . As the tourist you must be armed to the teeth with information.

The remote dense Bwindi impenetrable park is a renowned Mt. Gorilla territory. It lies in Southwestern Uganda on the edge of the rift valley. Its mist-covered hillsides are blanketed by one of Uganda’s oldest and most biologically diverse rainforests, which dates back over 25,000 years and contains almost 400 species of plants.

Much as it is famous for mountain Gorillas, there is more to it than that, as it is an outdoor paradise for wildlife watchers, hiking enthusiasts, family vacationers, outdoor lovers and photographers of all kinds. It is filled with majestic flora, amazing wildlife, spectacular waterfalls, pristine rivers and much more to provide ample opportunity for great exploration and photography.

Mountain gorillas are the top tourist attraction in Uganda. They are also only found in Rwanda and DRC. This therefore renders them rare, not only in Africa but also worldwide. This explains why they generate the highest foreign exchange for Uganda as compared to other wild animal tourist attractions.

The global population of those mountain gorillas is eight hundred in total and Bwindi impenetrable forest in Uganda harbors more than half of that total number. It harbors 459 individual mountain gorillas as per the last 2019 Gorilla Census. This makes up almost half all the mountain gorillas in the whole world. This makes Uganda more desirable by tourists than the other two countries. Besides that, in Uganda, the cost of a gorilla permit is 700$ dollars per person. The money is used to support the neighboring counties of the park and conservation of the gorillas. Furthermore, one cannot miss to notice the beautiful landscape that encompasses the remote Bwindi Impenetrable National Park and the immense Lake Victoria thus Gorilla Permits.

Various tour companies in Uganda for example African Adventure Traveller, book accommodation and take you around your areas of interests, instead of driving the underdeveloped roads of Uganda, more so for the foreign tourists.

Travellers gather at the head office of the park by 7:30am. Park Rangers guide small groups into the forest to track gorillas that are grouped in portions of eight tourists maximum.

While in the forest, you as a tourist are allowed to take pictures, take water, take short breaks to talk, ask questions, rest and even just remove masks to breathe for as long as one keeps their distance, due to the prevailing global pandemic, Covid-19.

The forests are mostly rainy but sometimes the incoming rain is unpredictable.  For this reason of the unpredictable weather, for the trek, one would wisely need to be armed with a rain coat that is water proof, trekking shoes, thick socks, full pants, full-sleeved shirts and a stick for support while walking.

The hike can be from 30 minutes to several hours, and that is one way, depending on one’s pace of movement. The tour guides try to communicate with the gorillas. In that way, they can get to identify their location by shouting in the forests in a way similar to the gorillas.

The Bwindi impenetrable forest is a natural Fort Knox where both Gorillas and Visitors are safe and secure. Preventive measures are taken at every level, whether you are Birder, Hikers, Biker, or Gorilla Trekker. These are some of the guidelines that trekkers must obey while on their voyage:-

-Make sure to speak in low tones in order to avoid disrupting the peace of the gorillas .

-Do not throw away garbage while in the forest

-As you approach the actual site it’s advisable to leave the walking sticks behind as instructed by the ranger.

-Maintain 7m distance from the actual gorillas since we share a lot of DNA , diseases could be easily transferable

-When the gorilla charges follow the instructions of the ranger

-Desist from feeding the animals

-Smoking and eating is strictly prohibited

Despite the fact that it is famous for the gorillas, there are also two other animals; the monkeys and birds of variety of intriguing species. Furthermore, Bwindi Impenetrable Forest is known for its exceptional biodiversity with more than 160 species of trees and over 100 species of ferns.