Gorilla trekking experience in Rwanda : Gorilla Trekking in Rwanda is the most unforgettable experience for any travelers to Africa specifically in Rwanda. Rwanda among the other 2 countries of Uganda and the Democratic Republic of Congo are the homes to the remaining mountain gorillas in the whole world and Rwanda is estimated to have over a quarter of the world’s remaining mountain gorilla population, it’s no surprise that the majority of guests visit Rwanda to track and view the highly endangered mountain gorillas. 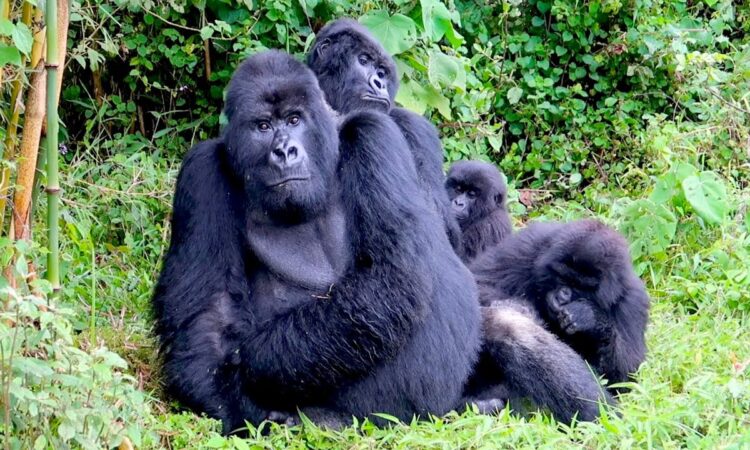 Rwanda is a wonderful family destination and it is superb for primates in general including the fun-loving Colobus monkey, the Golden monkey and the boisterous chimpanzee in the Nyungwe Forest. However, if the sole purpose of the trip is gorillas, a 2 Days Rwanda Gorilla trekking safari is an idea package for all travellers.

There are about 12 gorilla families living in the Volcanoes National Park which are fully habituated with a few others habituated solely for scientific research.

Each gorilla family consist of at least one silverback along with several females and youngsters. The families available in Volcanoes national park includes; The Susa, Igisha, Karisimbi, Sabyinyo, Amahoro, Agashya, Kwitonda, Umubano, Hirwa, Bwenge, Ugyenda and Muhoza. Gorillas move in families that and tend to stick to a preferred area of stay thus they are constantly monitored and protected by park rangers with each group coming into contact with tourists for a strict maximum of one hour per day.

Gorilla trekking in Rwanda starts early by visitors gathering at the Volcanoes National Park headquarters in Kinigi at 7am and are allocated a family group on the day according to fitness levels as well as being briefed on protocols and rules for visiting the gorillas.

When you start hiking up to their various locations, it can last anything from 30 minutes to 4 or more hours to reach an altitude of between 2,500 meters and 4,000 meters where the mountain gorillas are most likely to be spotted. Porters are available to carry backpacks and cameras, as well as to offer a helping hand along the route.

In order to protect gorillas from disease, no children under 15 or people with illnesses may go tracking. Only a minimum of 8 people are allowed to go for gorilla trekking thus only 8 tracking permits are issued per family per day, meaning the encounter is as intimate and as unobtrusive as possible.

With only 96 permits available each day in Rwanda, it is highly recommended to book in advance a reputable tour operator such as Achieve Global Safaris.

Each gorilla permit costs US$1.500 per person on a daily. 10% of the revenue from the permits is channelled towards local communities for projects like building schools and health centres as well as roads. There is a compensation fund for local farmers should any gorillas damage their crops, which helps to ensure peaceful co-existence. Gorilla tracking also provides employment for many locals, from rangers and trackers to porters, drivers and staff at tourist lodges.

There is an annual ceremony called Kwita Izina, which directing translated in English means “naming”, this naming ceremony of the new born mountain gorillas is considered a special experience in Volcanoes National Park with guided tours leading up the main event providing an opportunity to meet park staff and conservationists, attend cultural evenings and a celebration in Musanze.

At the naming ceremony itself, there’s music, dancing, and discussion about Rwanda’s great strides in gorilla conservation, and the great challenges that remain.

There are other tourist attractions besides Gorilla trekking in Rwanda such as Dian Fossey hike whereby those interested in tracking the footsteps of Dian Fossey, her tomb is a 30-minute drive from the park headquarters and then two or three hours hike through the forest, to above 3,000m altitude, Hiking experiences in Mount Bisoke and Mount Karisimbi, Wildlife safari experiences in Akagera national park and Chimpanzee trekking in Nyungwe forest national park.

In conclusion, trekking gorillas in Rwanda is safe and relatively accessible and the unique opportunity to see gorillas in their natural habitat is unforgettable and some travellers even say life changing after an encounter with the mountain gorillas in the wild that is as they go about their daily lives that are carefully managed by with expert trackers and guides leading small groups of tourists up bamboo-covered slopes to spend a precious and awe-inspiring hour just a few feet away from the gentle creatures.