Hiking Mount Karisimbi is one of the prominent amazing safari activities offered in Rwanda the land of a thousand hills. Rwanda is a thrilling tourist destination located in central and East Africa region of Africa, Rwanda one of the smallest countries in Africa lies a few degrees south of the equator bordering Uganda the pearl of Africa, Tanzania, Burundi and the Democratic Republic of Congo. 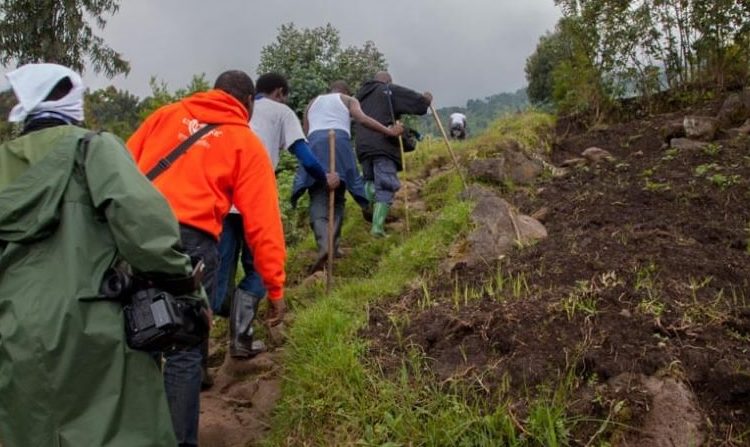 Karisimbi hiking is at times referred to as the Karisimbi volcano hike that takes place on the breathtaking karisimbi volcano. Mountain Karisimbi is a dormant volcano situated on the border of Rwanda and the Democratic Republic of Congo in the western arm of the African rift valley. Mountain karisimbi deriving its name from a native Kinyarwanda word amasimbi meaning white shell which is a reference to white-capped summit which is often seen on top of this volcano is part of the Virunga Mountains which consists of 8 volcanoes that is Mount bisoke, mount Nyiragongo, mount mikeno, mount mgahinga, Mount muhabura, mount sabyinyo, mount Nyamuragira and mount karisimbi.

Mount Karisimbi standing at altitude of 14,787 feet above the sea level is the highest of all the eight Virunga Mountains and ranked 5th highest mountain in Africa, while hiking this volcano you get to exquisite view of the neighboring volcanoes that is mount mikeno in the North, mount Bisoke in the East and mount Nyiragongo in the west. Mount karisimbi is situated in Volcano national park which is a popular tourist destination famed for sheltering the great endangered mountain gorillas, these mountain gorillas use the deep forest vegetation cover on the slopes of this mountain at varying altitudes as their home. Mount karisimbi known for its exotic plants is covered with four belts of distinct vegetation cover such as tropical forests with a mixture of different tree species at different altitude levels, in the thick forest cover, there is a variety of wildlife which can be noticed.

Hiking to mount karisimbi is one of the amazing retreats one should engage in for a lifetime, hiking on this volcano is approximately a 2 days hike to reach the top of the volcano, though the hike is not so easy it is very rewarding and worth a try. Mountain karisimbi hiking starts early in the morning at 6: am, this hike requires a tourist to be physically it to get to the peak and tourists take a rest at the first camping area which is reached on after navigating through the bisoke side. While hiking tourist follows various trails which are always slippery and muddy but reward you with scenic views of the neighboring volcanoes, beautiful evergreen vegetation and encountering countless wildlife species such as mountain gorillas, monkeys, and different bird species.

Mount karisimbi receives rain through the year which is greatly attributed to its altitude that is why it is very wise to carry rain suitable hiking stuff like rainproof jackets, sweaters, rainfall proof bag back and hiking shoes. While hiking mount karisimbi you also get to encounter the famous Karisoke research center which is situated between karisimbi and Bisoke Mountains, the karaoke research center is a re-known research center which was started by Dian Fossey an American zoologist and mountain gorilla conservationist who fought so hard to save the population of mountain gorillas which was declining due to poaching and killings from rebels. At the karisimbi research center you get to visit the remarkable grave where she (Dian Fossey) was buried after being killed by unknown bandits.

As you prepare to go for hiking it is advisable to carry appropriate items and essentials which will facilitate the safari for the best experience, they include

Hiking mount karisimbi is very amazing but it is more amazing in the dry months of June, July and August and in these months you get to enjoy the view of snow which covers the volcano in the dry months.