How Do Gorilla Show Respect? Other Facts

How does gorilla show respect? Gorillas are like humans, when things are calmer, gorillas often greet one another by touching their noses together, what an emotional sign of greeting they have, sometimes gorillas can give a reassuring embrace. The female aligns themselves with the silverback as their leader, openly soliciting mating. It is the leader’s job to keep the group safe from joining other groups, but it pays to be in his good emotion. 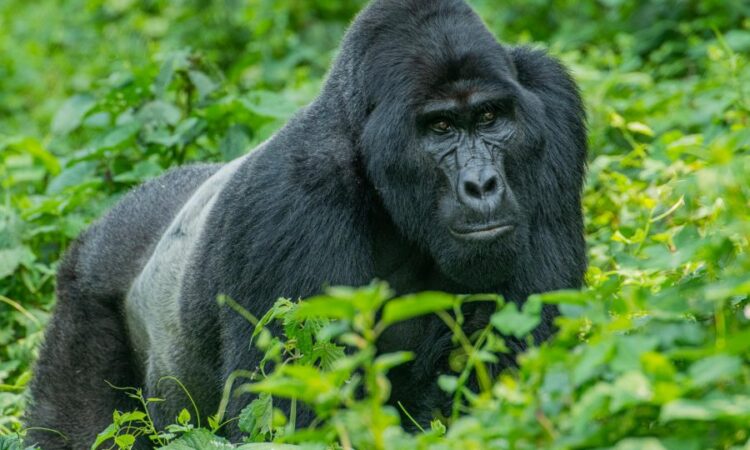 How do gorillas interact with humans?

Just like in humans, gorillas do interact with humans through different methods of communication such as body postures, facial expressions, vocalizations. These species can also use a variety of behaviors and vocalizations to communicate dominance.

Gorillas also uses all senses in their communication with conspecifics not only seeing and hearing but also touching and smelling. The leader of the group ‘’silverback males’’ have a characteristic smell. In case of harm to the group, gorillas additionally emit a very specific scent which can be smelled at many meters, just as a sign of alarms to the group without any noise.

Can gorillas be friendly

Generally, gorillas are unique species known to be gentle, peaceful and friend primates and the fact that they share 98% of their DNA with humans, something that proves that gorillas are more like us. They are social mammal and only become aggressive towards humans when they feel threatened and if they are threatened never look direct to their eyes instead look down as move forward.

Can gorillas and humans be friends?

This happens because gorillas can be trained to get closer to humans unless you attempt to hurt their infants and can become aggressive only when they feel disturbed and when they charge they react by thumping, breaking ribs or end up killing a person if not rescued.

Some of The Rules and Regulations;

Keep your voices low and observe quietly making unnecessary noise which can threaten the peace of mountain gorillas thus feeling being threatened.

Never look directly in the eyes of gorillas this makes them feel insecure.

If gorilla charges at you, do not attempt to run away, it is very risk.

In case a gorilla charges at you follow the guidelines of your guide; Crouching down, pretending has if you’re eating vegetation and wait for the gorilla to pass.

Flash disc cameras are not allowed while trekking mountain gorillas.

Mountain gorilla trekking is only done in a group of 8 people.

Can humans touch a gorilla?

Since gorillas are vulnerable to human diseases, humans are not allowed to touch gorillas are wild animals. If you want to cough or sneeze, you’re requested to turn away your head in the presence of gorillas.

Can you smile at a gorilla?

According to gorillas smiling shows a fear face towards them, that’s why they can never ever smile at this beautiful little creature.

Mountain gorillas with other kinds of primates and humans are afraid of several things like water, insects like caterpillars and reptiles like Chameleon. Gorillas are like other apes come along humans who find it hard to swim naturally which prompts them to desist from expanse water masses like Lakes and Rivers.

Why do gorillas hit their chest?

Gorillas tend to beat their chests to show how big their body is, the only assess fighting ability of rivals and attract mates, according to recent research. Mountain gorillas also often hit their chest whenever they perceive a danger or when they are communicating.