Joshua Cheptegei flagged off to Ostrava by the Uganda Tourism Board 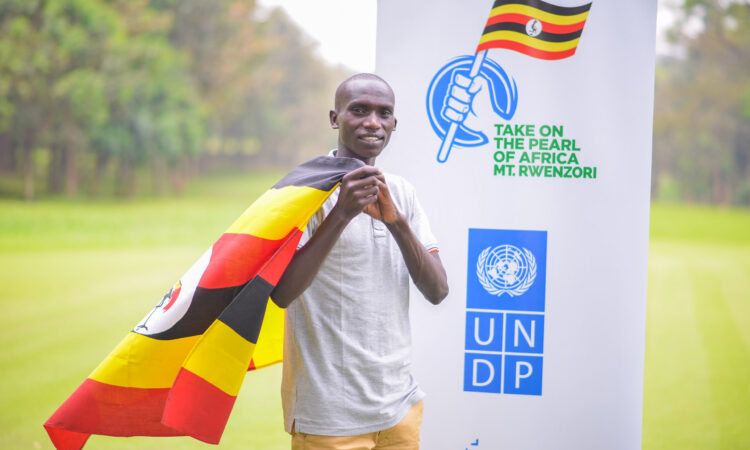 The athlete who has broken a couple of world records in the past refers to himself the “silverback”  of the pearl of Africa (Silverback is a term used to refer to male dominant mountain gorillas) and is very hopeful that he will continue to break  world records even as he heads to Czech Republic for the 60th Ostrava Golden Spike. Though new to this competition, Cheptegei will be attempting to break the world record in 3000m.

As he spoke to the press at the Uganda Tourism Board offices, Joshua Cheptegei stated that that he wants to make history in Czech Republic and his hoping the Ostrava Golden Spike competitions will be a preparation platform for him for the upcoming Tokyo Japan Olympic.

The team at the Uganda tourism board represented by Claire Mugabi the marketing manager wished Chetepei as they emphasized that his participation in the competitions would directly promote Uganda as a tourism destination.

Referring the silverback title the athlete has adopted, Claire Mugabi said they expect Cheptegei to win at these competitions that’s why his named silverback because he has the strength and ability to win.

Joshua Cheptegei has been the Uganda tourism ambassador for destination Uganda since February 2021 and in his role as the ambassador he uses all his publicity platforms to promote Uganda to the local and international market as a top tourism destination.

Uganda the pearl of Africa is known for its unmatchable beautiful comprising of both natural and historical features coupled with a uniqueness of peoples from the different tribes and regions that make up the country’s population.

Uganda is also known for being one of the top birds, primate and wildlife hubs in Africa and East Africa with over 3000 bird species, about 900 mammal species and 10 primate species include the rare mountain gorillas living in different parts of the country.

Among the variety of wildlife in the country, Uganda is home to the rare tree climbing lions that live in the Ishasha region in Queen Elizabeth National Park among other rare animal species.

Uganda has a wide array of birds that make their homes in several places in the country; the birds include the endemic albertine birds in the western region of the country and several others like the shoe bill stork that is a highly sought after bird by bird watchers.

The pearl of Africa is endowed with several natural features that complement the country’s beauty; features like the Nile River and the source of the Nile, the Murchison falls, the Rwenzori Mountain, the virunga massif among others.

All in all Uganda is a one tourist destination you shouldn’t miss on your visit to Africa, you will be delighted at everything in the country and left in awe of the several beautiful experiences in the different parts of the country.