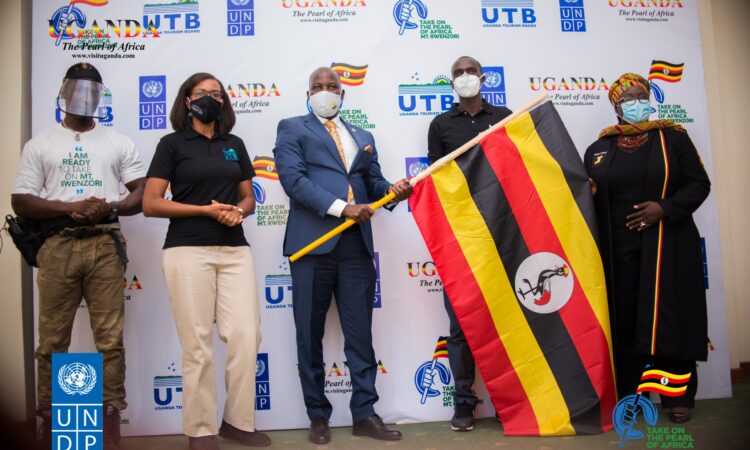 The two sportsmen together with group of other hiking enthusiasts and Uganda tourism board representatives are taking on the mighty mountain Rwenzori in 3 days hiking challenge that is part of “take on the pearl” campaign by the Uganda Tourism Board. This adventurous pursuit is intended to help interest many more people to visit mountain Rwenzori and the western part of the pearl of Africa-Uganda to the both Local and Foreign people.

Take on the pearl campaign that has run for about 3 months is intended in promoting Uganda and exciting people about the different tourism sites and activities in the country. The campaign is run by Uganda Tourism Board and sponsored by the United Nations Development Program (UNDP). Through the Mt Rwenzori hiking challenge and other similar challenges, the Uganda Tourism Board hopes to highlight the necessity for collective actions from all sectors and the public to diversify the country’s tourism industry and protect the natural and cultural resources in the different regions.

Common wealth Champion Joshua Cheptegei said on top of being excited to take on Mt. Rwenzori, he was also more than ready to challenge his fitness since he had been preparing for almost a month since his return from the World Half Marathon Championship. He also stated that since his been training so hard, his very sure he won’t disappoint himself or his fans.

Kick Boxing champion Moses Golola like Joshua his excited to be taking on this challenge and also very delighted to be a part of the group highlighting the beauty of Uganda.

The champions were both very grateful to Uganda Tourism Board for organizing this and United National Development Program for sponsoring the campaign.

The United Nations Development Program (UNDP) supports Uganda in various projects that support the development of the country and currently its support the promoting of tourism in the country through supporting the mountain Rwenzori challenge and availing up to UGX 3.7 million shillings to help the Ugandan tourism industry recover from all the terrible effects of COVID19.

The flagging off of the team was officiated by the state minister for Tourism, Wildlife and Antiquities, Honourable Godfrey Kiwanda who thanked the participants and wished them the very best this adventurous experience; he also extended his gratitude to the organisers UTB and the Sponsors UNDP.

Mountain Rwenzori is the 3rd highest mountain in Africa after Mount Kilimanjaro and Mount Kenya respectively. The Rwenzori peak – Margherita Peak that stands at 5,109 meters above sea level is also a UNESCO Heritage site. The Margherita peak is snowed throughout the year and it’s believed that the Rwenzori glaciers are the most beautiful in the whole of Africa. Rwenzori means “rainmaker” in the local language and the mountain is also known as “mountains of moon” a name it acquired from the Greco-Roman mathematician and astronomer Claudius Ptolemy who is also known as the father of geography.

A hike on the mountain Rwenzori takes you through the mountain ranges and terrains that are along the border of Uganda and the Democratic Republic of Congo, these ranges have a variety of flora and Fauna that you can sight as you take the hike. As you hike you will also see beautiful views of the surrounding areas of the regions both in Uganda and DRC.

Mountain Rwenzori is a high-altitude mountain and its terrains are quite rough to hike thus need fit hikers to take on the hiking challenges; it’s for this reason that the mountain doesn’t receive a lot of visitors making it a crowd-free tourist site.

Some of the other things that are being done to promote tourism in the country include the recent tariff discounts Uganda Wildlife Authority introduced for the festive season that include:-50% discount on all park entrance fees and primate trekking permits. The offer is running from 1st Dec 2020 to 31st March 2021.