The Kabaka’s Lake located just 5 km from the Kampala City centre is found in Ndeeba, Kampala between Ring Road and Nabunya Road. It is the largest man-made lake in Uganda and probably in East Africa and was constructed between 1885 and 1888. 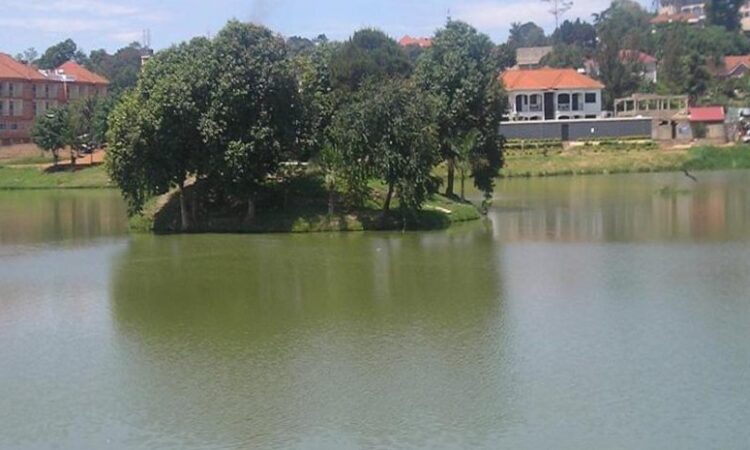 The Kabaka’s lake is of great cultural significances and was constructed basing on the Buganda culture. The lake was constructed by the 52 clans of Buganda during the reign of Ssekabaka Mwanga the second to thrill while on a Uganda Safari.

The construction of this lake was meant to provide a transportation solution to the then King – Ssekabaka Mwanga the second as he moved from his main palace in Bulange Mengo  to Lake Victoria then called Nalubale. This channel would save the king the hustle of going through the chaos of the city centre and then Entebbe road, just to reach Lake Victoria and his other palace.

The plan was that this lake would be a channel wide enough for the king to travel by boat from the palace to Lake Victoria where he would go swimming and fishing on a regular basis.

Also because Ssekabaka Mwanga the second had built a palace near Lake Victoria at Mulungu Hill, in cases where he just wanted to stay there, this channel would be perfect for travel to the palace.

The other thing was, during the reign of Ssekabaka Mwanga the second, there were some conflicts between tribes and that the time the British were in Uganda, doing a lot of things that looked like a threat to the kingdom, so in an event that the British launched armed conflict with the kingdom, the kabaka’s lake would be a perfect escape route for the king and other royals.

This was the period the British were implementing lots of British policies and Christianity was growing which was in great in contrast with the kingdom or cultural norms of the day. In fact this is the season period the Uganda martyrs were killed on the same fears. So it was a valid initiative to continue to protect the kingdom and its interests.

And to prove this theory the construction of this channel, was abruptly stopped due to a conflict that broke out in 1888 in the Buganda Kingdom. This was a religious war among the subjects of the King, but it was so intense it divided the clans and people the work on the channel was halted indefinitely.

At the time of this conflict this proposed channel had not yet reached Munyonyo a point that was would have been very pivotal in connecting the channel to Lake Victoria. The conflict took a while to resolve and by the time all was settled and done, the people that had started the work or that were more enthusiasts about the channel were either dead, has lost interest or because of the British new rule, they had picked up other interests. Thus the construction ended at the point where they were at the point the conflict broke out.

The Kabaka’s lake this day occupies an area of about 1.8sq km and stands at a depth of 200 feet. It gets its water from underground springs and it doesn’t feed into any other water body, thus the lake’s water levels are always constant.

The lake is a great site to visit for anyone touring Kampala City and is also home to a number of bird species. A visit to the lake will give you a chance to enjoy great sites, bird watch, engage with the local communities and after you can visit the Buganda Palace which is close by to learn more about Buganda and the Buganda culture.