Karamajong Traditional Culture : According to anthropologists, the Karamojong are part of a group that migrated from present-day Ethiopia around 1600 A.D. and split into two branches, with one branch moving to present-day Kenya to form the Kalenjin group and Maasai cluster. The other branch, called Ateker, migrated westwards. Ateker further split into several groups, including Turkana in present-day Kenya, Iteso, Dodoth, Jie, Karamojong, and Kumam in present-day Uganda, also Jiye and Toposa in southern Sudan all of them together now known as the “Teso Cluster” or “Karamojong Cluster”. 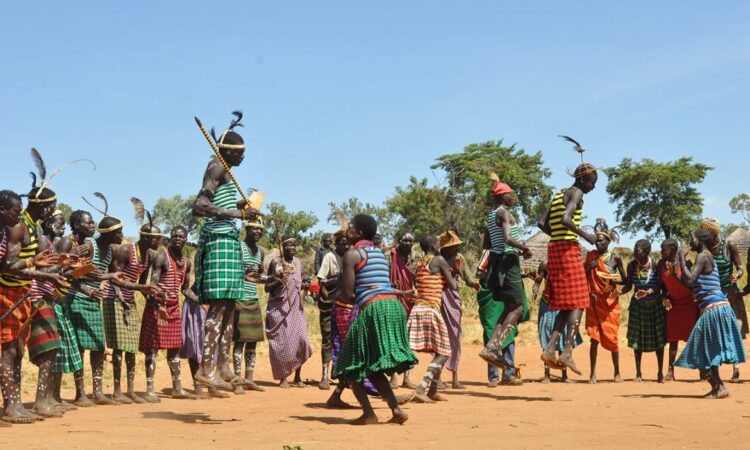 in the Karamojong language, the people and the language have the convenient prefixes ŋi- and ŋa- respectively. The lack of a prefix indicates the land where they live. All the above-mentioned branches from Ateker speak languages that are mutually intelligible

The main livelihood activity of the Karamojong is herding livestock, which has social and cultural importance. Crop cultivation is a secondary activity, undertaken only in areas where it is practicable.

Due to the arid climate of the region, the Karamojong have always practiced a sort of pastoral transhumance, where for 3–4 months in a year, they move their livestock to the neighboring districts in search of water and pasture for their animals.

The availability of food and water is always a concern and affects the Karamojong’s interaction with other ethnic groups.

The Karimojong jealously guard their culture and take a lot of pride in it. They harbor some interference in their traditions and customs, however. Under their tribe cattle are considered the bane of society. Cattle are awarded for good acts, acts of valor, courage and commitment. They are also a sign of success and wealth in society and are offered during bride price. Because of this, boys receive cows when they are young and gradually increase their stock as they grow up to get a large herd.

The people live an extended life and normally live in large homesteads constructed together as a family. In East Africa, these are known as “manyatta” and are a tourist attraction. The livestock kraal is situated in the center of the manyatta. The men and boys are in charge of protecting this homestead while the women and girls engage in home keeping and minimal cultivation. The boys during the day tend to livestock in the fields as the girls learn from their mothers how to maintain the home.

In a society synonymous with nomadic life, the people of this tribe are identified by their dark skin complexion and the height as they are very tall. They have facial tatoos and piercings done for marking, identification and beauty. Some of these even convey hidden messages sometimes.

They also wear light clothing due to the very hot arid weather they live in and they have loincloth surrounding their nether regions.

In the past, these people were a misunderstood tribe perceived to be primitive lawbreakers and nomadic wastes….however with the time in Uganda they have come to be appreciated and their hidden sophisticated but important history and way of life has come to light.

Of late the tears of Karamoja are being wiped away and the people and region are recognized as a fundamental part of society.

Due to the arid climate of the region, the Karamojong have always practiced a sort of pastoral transhumance, where for 3–4 months in a year, they move their livestock to the neighboring districts in search of water and pasture for their animals.

The availability of food and water is always a concern and affects the Karamojong’s interaction with other ethnic groups.

The Karamojong carry out piecing for beauty. this is done to the girls before marriage. Warriors also carry out piercings on their faces for intimidation and to mark their battle victims. The boys do piercing also.