King Oyo : Toro kingdom is one of the great bantu kingdoms situated between the borders of Uganda with natives refered to as the batoro with their interesting languages; Rutooro. they also constitute of the bamba ,bakonzo.Occupying the fibrant Western part of Uganda, in the south of lake Albert. with its beautiful palace situated at the majestic capital fortportal. the 180 year old kingdom has been ruled so far by 12 kings. The first king Omukama kaboyo Olimi 1 ;the eldest son of Omukama Nyamutukura kyebambe of bunyoro rebelled and formed his own kingdom , Toro which was inflitrated by bunyoro in 1876 but later attained its independence back in 1891. 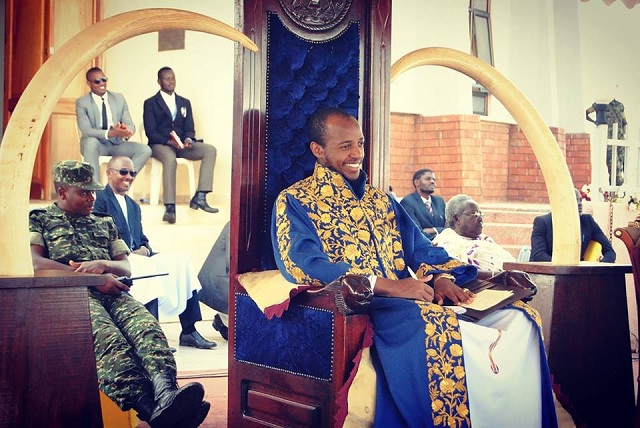 Though Rukirabasaja oyo nyimba kambaba Iguru Rukidi 4 king oyo is the reigning king now, there were other rulers who governed the kingdom in the past days that is to say

King oyo took over from his father at a very young age,the 12th ruler of the kingdom at the age of three and half years, born on 16 April 1992 to king Patrick David mathew olimi 3 and queen Best kemigisa kaboyo,he had to take over the thrown after the death of his father; David mathew olimi 3.he was coronated as a king at around 4:00am on 12 September 1995 after a week of burying the late king where at that time ha was crowned the king infront of the jubilating crowd.His first meal as king was millet dough while sitted on the laps of a Virgin girl.

Following that king oyo was very young and couldn’t tackle the kingdom duties and perform his kingship duties,the kingdom had to appoint some persons who would assist him as he grew and also enjoyed his childhoods. Three reagents appointed was his mother,his aunt/ godmother, princess Elizabeth bagaaya,his uncle,prince Jimmy mugeayi and also president museveni.

As he grew,king oyo also played with his friends and after presided the kingship duties and his power was only limited to the cultural duties. his kingdom’s capital in it fortportal. King oyo spent two years in London and returned to Uganda where he studied in kampala international School for his high school,while there,he enjoyed art, music,math plus swimming.and later,he graduated in 2013 October, he graduated with a degree in business management from Winchester University in the United kingdom.The beauty palace was beautified by the late colonel muamar Gaddafi, the former leader of libya who always donated to the kingdom. he was later named the defender of the Tooro kingdom by the young king.

King oyo also formed the batebe foundation; special education fund for the needy children of Toro,but he continues to travel around the world looking for donations for his kingdom. he recently received a donation of 100 wheel chairs.

His majesty king oyo is engaging and inspiring over 500 million young people to take a stand against HIV/AIDS using a creative mix of youth innovations, sports, social media. We also see his passion in agriculture and entrepreneurship.

The batooro; part of the Bantu speaking people have a rich cultural heritage, they love and proud of their amazing tribe. And their children right from birth, are taught to respect and value their elders and learn from them . they have exquisite names, pet names, every mutooro has one including the king, like Akiiki, Amooti, Abwooli among others.

With an audacious indigenous handicrafts, tribal customs and a wonderful culture of oral tradition, the batooro are an organised community with different ways of conduct and lifestyle.

The batooro occupy  the districts of fort Portal,kabarole,kasese among others, that’s their beautiful love nests where they live in harmony under king oyo as their handsome young king .