Kitu Gorilla Family Gets Another Baby

Kitu Gorilla Family Gets Another Baby: Kutu mountain gorilla Family in Rushaga section in Bwindi National Park within the month of October welcomed another baby gorilla within a period of weeks. Uganda Wildlife reported that the young gorilla was spotted in the wild on 21st October 2020 with its mother. This baby gorilla is the second baby for this particular adult female in the group and the baby brings the total number of individuals in Kutu to 11. Kutu Family is a new family in Rushaga sector that was formed about a year ago and it’s named after the silverback that is called Kutu. 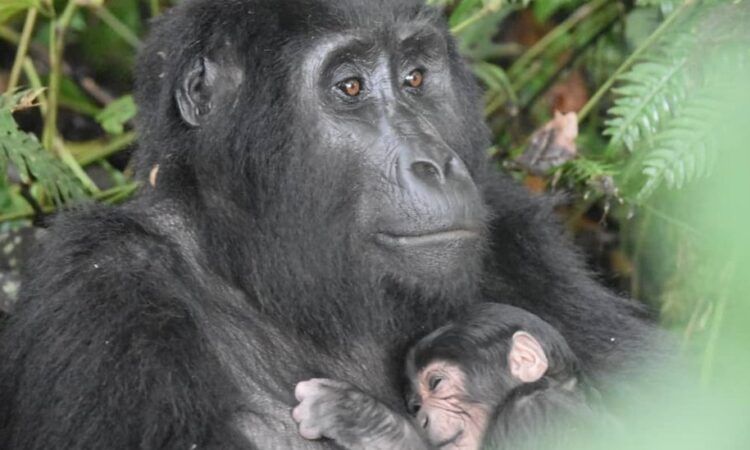 This family is a split off from Nshongi. It split from Nshongi because of disputes that arose between Mishaya and Nshongi. It was because of those disputes that Mishaya left the Nshongi family, leaving some females to form the now Mishaya family. The family currently has 12 individuals mainly females and infants that are led by Silverback Mishaya. Mishaya the silverback is famous for fighting and starting fights with other gorillas and those fights have led to the family living in isolation and losing some of its members.

This group currently has 9 individuals that are led by a silverback. The other members are adult females, juveniles and infants. The group is a break aways from Kahungyge when Busingye the current silverback left the group with some females to form his own group or family. The family’s name which is also the name of the group’s silverback means peace in the Local language, however this group and the silverback are not peaceful at all. The silverback of this group is very spiteful known for causing numerous fights with other mountain gorilla families.

This family was first trekked in 2011 and is led by silverback Rumansi and two sub- silverbacks Ruhamuka and Rwigi. The other members of the group are females and infants and the family has total number of individuals coming up to 13. The family however had more members at the time of its first trekking but due to unknown reasons some members left the family forming Busingye family.

This is the largest family in the whole of Bwindi National Park. The family current has 25 individuals though at the time of the split from Mweza group the individuals were 36 but some have died along the way and others have left the group. The group is led by a dominant silverback but it also has two sub silverbacks and three black backs. The other members are adult females, juveniles and infants. The group gets its name from the dominant silverback Nshongi.

This mountain gorilla group is currently made up of seven individuals thus one silverback, adult females and infants. This group is a break away from Nshongi gorilla family. Not much is known about this family because of its versatile and elusive nature. Trekkers that get to visit this family are usually treated to a great show by these apes.

These families are also in Rushaga, however they are not available for trekking they are currently only visited by trekkers that are interested in habituation. During habituation process persons spend four hours with the mountain gorillas exploring the daily activities of these primates as they help the gorillas get used to human presence.

Rushaga sector is a thrilling sector to trek and one that is quite adventurous because of its hilly nature. A mountain gorilla trek in Rushaga sector on top of giving you an opportunity to spend an hour with a mountain gorilla family, you also get to see spectacular views of the virunga massif ranges across Rwanda and Uganda.