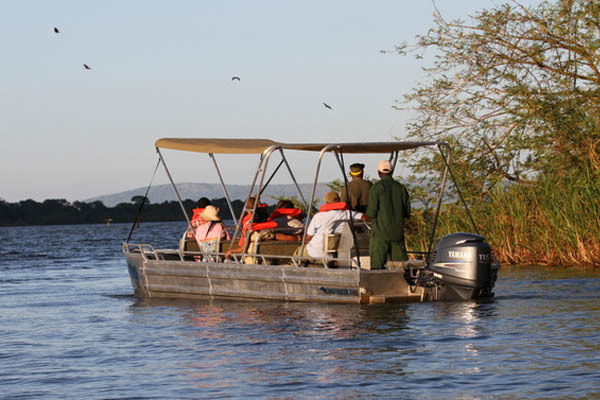 Lake Ihema is one of the many lakes in Rwanda and is the second largest lake in the country after Lake Kivu. Rwanda the land of a thousand hills is well known for its beauty that has a variety of hills, unique tree species, vegetation, acacia and bushes combined with the country’s distinctive rivers, lakes, and wetlands that add to the natural beauty of the country.

Akagera National Park is home to a couple of lakes that are fed by the famous Akagera River that forms part of the Nile River. Akagera River is the section of the river that starts in Burundi and flows east to Rwanda’s Lake Ihema and continues to Tanzania. Because of this River Akagera and Lake Ihema are said to form the border between Tanzania and Rwanda.

Lake Ihema occupies a total area of 90 sq kilometres, in the southern part of Akagera National Park and it has an altitude of 1,292m with a depth of 5 to 7 metres.

Lake Ihema is home to a variety of water life and birdlife that includes but not limited to hippos, crocodiles, etc and Papyrus gonolex, shoebill stork, herons, jacanas, sandpipers, plovers, hawk, malachite kingfisher among others, Respectively,

The lake is encompassed by papyrus swamps that are perennial and seasonal; these add to the habitat’s suitability for the different animals and birds that live in the lake and the lake’s surroundings. The swamps make the perfect wetlands that form ideal habitats to the park’s wildlife. The wetlands are also a habitat for the numerous bird species that live in the park especially in the water.

Lake Ihema being in Akagera National Park is a protected area and though the lake’s waters have fish, fishing on the lake is restricted by a decree that was issued in 1934.

Despite its beauty and uniqueness, Lake Ihema’s waters are threatened by the water hyacinth that keeps spreading across the lake almost daily; the hyacinth’s effect on the lake not only contributes to the lake’s degradation but also affects the survival of the water life that lives in the lake. The water hyacinth does this as it covers the entire water body reducing the amount of oxygen, temperature and phosphate in the lake. The reduction of all these lead to the death of water life or even prevent the growth and development of new water life.

Boat cruises on the lake are scheduled by Akagera National Park and they normally happened in the early morning at 8 am or in the afternoons at 2 pm.

On your boat cruise, you will have a front-row seat to watch a variety of water life as they swim and play in the water, you will see wild animals at the lake’s shores coming to quench their thirsty and you will also see numerous birds that live on the water and others as they fly away to their nests.

You will see the Akagera River currents as they flow into the lake and other lakes, you will enjoy the scenic views of the surrounding flora that includes unique bushes, trees and papyrus.

While visiting Lake Ihema, in Akagera National Park, you can also engage in game drives to see more land wildlife and bird species. You can also take nature walks in the park to appreciate and enjoy the peaceful, scenic and refreshing ambiences and sceneries of the park.

When in Rwanda, therefore Lake Ihema is your perfect destination for wildlife viewing, birding and a relaxing chill from the craze of the day to day life.