Lake Ruhondo is a freshwater lake found in the North-Western part of Rwanda. It was formed by the process of volcanicity. It is located near lake Bulera on the outskirts of Musanze District, at the base of Rwanda’s largest volcano, the Karisimbi Volcanic Mountain which is part of the famous Virunga mountain range. The Virunga ranges are the other only place after Bwindi, where mountain gorillas can be observed in the entire world. 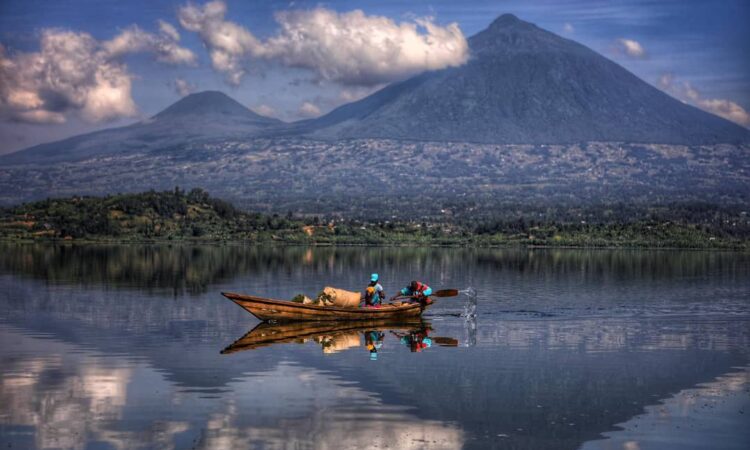 Lake Ruhondo is also said to be a twin lake to lake Burera which were formed following the eruption of Mt. Sabyinyo. It’s because of their proximity to each other that they are called Rwanda Twin Lakes and also because one of feeds the other. Separated with just a stretch of land of about 28,000 hectares, Lake Bulera is on a higher altitude than Lake Ruhondo so it appears like it’s pouring its water into Lake Ruhondo. Lake Ruhondo is about 180 meters deep.

Lake Ruhondo can be easily reached through the Volcanoes National Park. The lake is approximately 99km Drive on road from Kigali City which takes around two and half hours. It’s about twelve kilometers from the nearest town called Cyeru. Accessible through the Mgahinga National Park using the Cyanika Road from Kisoro Uganda which is an hour and half. Unfortunately the Uganda- Rwanda border conflict is still on. Most of the roads to the lake are tarmac and all-weather.

Visiting and touring Lake Ruhondo happens the entire year but it’s encouraged to visit during the dry season. There are plenty of activities tourists do when they visit the site. It’s a major tourist destination while in Rwanda on Rwanda tours. The shores of Lake Ruhondo give a good experience for walking safari to bird watch . There are numerous birds along the shore for example the Rwenzori batis ,Rwenzori Apalis and the handsome francolin. While on these community walks, tourists get the opportunity to interact with the native Rwandans who are very hospitable people with a very interesting culture. During the walks, tourists visit the farms where they get to engage in farm activities.

Boat cruising and canoeing is other popular activity done when one has visited Lake Ruhondo. A boat cruise around L.Ruhondo gives tourists a chance to explore the Virunga Mountains and a chance to see the Volcanoes National Park that also offers several birds species like the Red faced woodland wabler, the Rwenzori turaco ,Strange Weaver ,Dusky turtle dove, Kingfisher birds, and the brown necked parrot. The canoe sails give tourists a chance to see the nearby islands of Bushongo ,Munanira ,Bishosho and Cuza

Bird watching as well as taking natural walks is another mesmerizing activity not to leave out. There are number of birds to see ,they include the Herons,Kingfishers ,harmerkop and cormorant among others.

Being a lake fishing is also one of the various activities carried out along this magnificent lake. Visitors who wish to engage in fishing are taught by the native people how to use local methods of fishing such as the use of fishing baskets ,use of Spears ,use of fishing nets to mention but a few. But, tourists interested in bringing their own equipment are accepted too. The captured fish can be roasted by the tourists on a campfire to get the wild safari feel. Tourists can also take part in bicycle riding, having nature walks and other relaxing activities. In the additional the epic fishing, there also exists sports fishing on Lake Ruhondo.

The best time to visit Lake Ruhondo is at any time of the year because visits are open to visitors all year since tours are available .So visitors can contact any company they trust  and of their interest to book tours. Staying around the lake is very awesome experience with many beautiful hotels, lodges and restaurants which will give you a taste of local sumptuous dishes like isombe and uragwa.