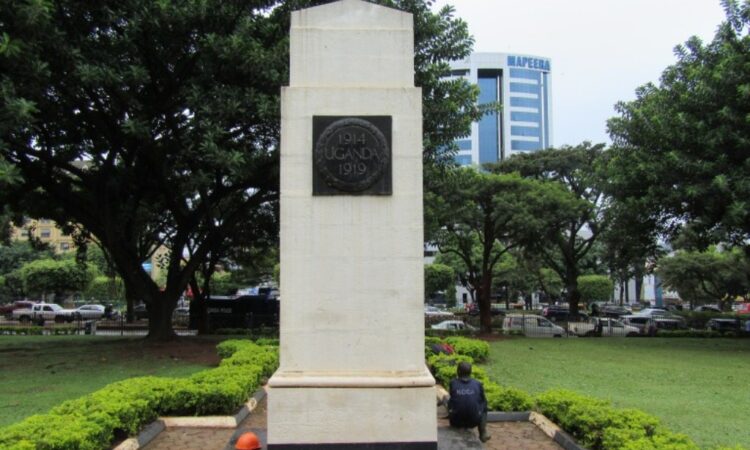 The Independence Monument is printed at the rear of Uganda’s currency notes. Uganda was colonized by Britain around the 1890s. An administrator of Imperial British East African Company (IBEAC) named captain Frederick Lugard raised the Union Jack (British Flag) at a fort he established on Old Kampala hill (Fort Lugard) and declared Uganda a British protectorate. From that point, Uganda and her resources belonged to the British government. Indigenous people had little or no say about the longer term of their country. The 1962 Uganda’s independence was welcomed happily and joyfully. Songs of jubilation and celebration were heard all around corners of the country. Gregory Maloba put up this important monument in Uganda to ensure the independence of the country.

World War Memorial Monument commemorates those lost in war II, Printed on the rear of 5,000 Uganda shillings note. It’s the oldest monument in Kampala built by the British colonial government in 1945 in memory of Ugandans who died supporting British soldiers during the first and 2nd world wars. This beautiful monument in Uganda is found on Kampala road, next to the Central police headquarters.

The Hindu Temple is hospitable to all visitors during the day. The sole requirement is to take care of silence and take away your shoes at the doorway. Here you’ll be ready to see the varied Hindu Gods and watch their faithful feed and dress them. Photography is allowed in this religious monument in Uganda as long as you silence your shutter sound.

This is located at Kololo Airstrip and was put up in commemoration of the Commonwealth Heads of state Meeting (CHOGM) 2007. it had been uncovered by the Queen of England and it’s thus far the foremost expensive monument in Uganda with a complete cost of 150 million Uganda Shillings.  Under the command of Prof. George Kyeyune, the works of the stride monument were conducted by a team of 11 professional sculptors.

Frederick Lugard, in full Frederick John Dealtry Lugard, Baron Lugard of Abinger, also called F.D. Lugard, (born January 22, 1858, Fort St. George, Madras, India—died April 11, 1945, Abinger, Surrey, England), administrator who played a major part in Britain’s colonial history between 1888 and 1945, serving in East Africa, West Africa, and Hong Kong. His name is especially associated with Nigeria, where he served as high commissioner (1900–06) and governor and governor-general (1912–19). He was knighted in 1901 and raised to the peerage in 1928. His monument is located in Fort Portal District formerly the location of  a Fort for Capt. Lugard

The Bahai temple in Uganda is located about 4 miles from Kampala and was constructed between 1958 and 1961 on Kikaya Hill visible in Kampala City.

It was the first Bahai faith temple in Africa and as this is a symbol of beauty and religion leaving visitors in awe at the beauty of trees and nature as one heads to the dome.

The Uganda National Mosque is a mosque located at Kampala Hill in the Old Kampala area of Kampala, Uganda. Completed in 2006, it seats up to 15,000 worshipers and can hold another 1,100 in the gallery, while the terrace will cater for another 3,500. Colonel Muammar Gaddafi of Libya commissioned the mosque as a gift to Uganda, and for the benefit of the Muslim population. Uganda has many mosques but this one is a skyscraper mosque.

The completed mosque was opened officially in June 2007 under the name Gaddafi National Mosque, and housed the head offices of the Uganda Muslim Supreme Council.[2] It was renamed “Uganda National Mosque” in 2013 following the death of Colonel Gaddafi as the new Libyan administration was “reluctant to rehabilitate the mosque under the old name thus Monuments in Uganda.

The Uganda Martyrs Shrine Namugongo is one of the largest Christian pilgrimage destinations in Africa dedicated to the 22 Martyrs and saints of Uganda who were martyred between 1885 and 1887 by the king of Buganda, Kabaka Mwanga II.

Groundbreaking for the construction of the basilica was in 1965. Construction was completed in 1968. The basilica was decreed on 28 April 1993, and is administered by the Roman Catholic Archdiocese of Kampala.[9] It is built close to the spot where Saint Charles Lwanga and Saint Kizito were burned to death in 1886 on the orders of Kabaka Mukasa Basammul’ekkere Mwanga II.

The Tombs of Buganda Kings constitute a site embracing 26.8 hectares of Kasubi hillside within Kampala City.

The site is the major spiritual centre for the Baganda where traditional and cultural practices have been preserved. The Kasubi Tombs are the most active religious place in the kingdom, where rituals are frequently performed. Its place as the burial ground for the previous four kings (Kabakas) qualifies it as a religious centre for the royal family, a place where the Kabaka and his representatives carry out important rituals related to Buganda culture. The site represents a place where communication links with the spiritual world are maintain