Mount Nyiragongo is the beauty of the Democratic Republic of Congo. It is a top tourist attraction that attracts thousands of tourists and hikers annually as they come to see the amazing active volcano and great at the amazing crater. 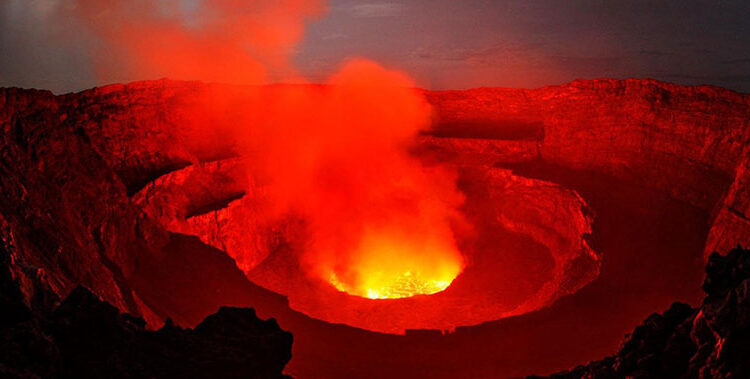 Mount Nyiragongo which is one of the world’s most active volcanoes. This active stratovolcano standing at 3470m has erupted several times with the last eruption in 2021 causing global headlines. This mountain has a crater rabbit 2 kilometers in diameter which forms a lava lake during the rainy season. This boiling lake is located on the top of its summit west of the Rwanda_ Congo border.

It is located within the pristine Virunga national park a home to one of nature’s most endangered species “the mountain gorillas”.

Despite its striking beauty along with its breathtaking crater, Mount Nyiragongo has a catastrophic history of sudden eruptions that have killed many.

14 years ago the mountain erupted destroying communities and claiming the lives of those along the slopes.

Its lava crater is over 2km wide filled with viscous lava that boils beneath the volcanos vent. The lava can be seen from 2 rims of lava that form coiled benches of lava within the crater walls of Nyiragongo volcano one realm is raised about 3175 meters while the second one elevated to about 2975 meters above sea level. Localized carbon dioxide toxicity, known locally as ‘mazuku’, has killed children even more recently. In locations where the gas seeps from the ground at relatively high levels, without the dispersing effects of wind, its effects can be deadly. On 8 March 2016, Goma Volcano Observatory discovered a new vent that opened on the northeast edge of the crater, following local reports of rumblings coming from the volcano. Some fear that this could lead to a flank eruption. Observers in 2020 witnessed a rise in the lava lake and other signs of an impending eruption.

Nyirangongo is the world’s largest lava lake while Mount Nyiragongo is ranked among the world’s most active volcanos having erupted over 34 times. It’s among the only four lava lakes in the entire world and the Mount is a tough hike. Researchers believe Mount Nyirangongo has the most fluid lava fed by a plume moving at a speed of 20 to 60 miles per hour. Hiking the mountain is a very hard task because they hike up a  distance of up to 11,400 feet to glimpse at the lava lake. Movement to and from the mountain peaks can be by road and with residence at top hotels to accommodate tourists visiting these prestigious mountains. Visiting the mountains happens the entire year and visitors from all over the world are welcome. Mount Nyiragongo is a major landmark in the tourism sector in the East African countries of Rwanda and the Democratic Republic of Congo.