Mountain Elgon also known as mount Masaba among the bagishu community, volcanic in nature is located in the Eastern region of Uganda, at the border of Uganda and Kenya, with Wagagai as its highest peak as compared to the others; surek , koitobos, mubiyi and masaba with an 80 km diameter with its lower parts favoring human settlements and the upper parts favouring fauna and flora. Emerging as one of the largest calderas in the world ,also consisting of the warm springs of river suam , kitum caves that contain some salt deposits and housing the mountain Elgon national game park to thrill while on Uganda Safaris . At 4000 kilometers squared Mountain ELGON is the world’s highest volcanic peak. 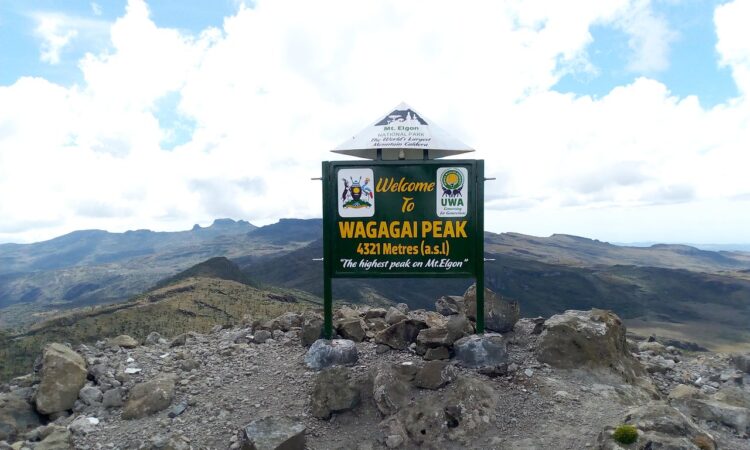 There is alot to take part in while in mountain Elgon, including the seemingly mountain hiking to the summit getting that airfield view from the height. While still down, it will take four days to reach wagagai passing through budadiri, the best timing being the months of June to August, December to march, where it’s easily accessible due to being dry unlike the rainy seasons. on your hike, animals like antelopes are noticed and also plant species like shrubs, Bamboo trees at the high points , moving a head, there’s is also emergence of Sipi falls easily viewed in kapchorwa, also a known base for Arabicca coffee growing with so many plantations, intercropped with bananas, beans on its slopes. Sipi falls is something not to miss when you decide to take a glimpse at mountain Elgon.

The Sebei and bagishu people are the main settlers of the Elgon region with their captivating cultures like the imbalu male circumcision that happen during specific times of the year in mbale with a lot of entertainment and fun, involves brewing, so captivating to the soul, participate in crop growing around its slopes. Also grow Arabicca coffee that supplements their income, attracting the attention of the tourists who come all the way to view the great once highest mountain. These tourists get the opportunity to participate in coffee picking, grinding, washing and also soothing their thirst with the great coffee with a pleasant aroma. Learn a lot interms of art and crafts, chatting with the natives who are more knowledgeable about it’s entire legends that played apart on how it was discovered.

The mountain was discovered by Joseph Thompson, an early Scottish explorer , though the bagishu believe that it was discovered by father masaba that’s why its refered to as mountain masaba sometimes, also initially known as mountain elgonyi by the Masai people. Jackson Frederick transversed around the parts of the Elgon caldera and wrote about it.

According to the bagishu, they believe that their ancestors were mundu and Sera; believed to have to have come out of a hole on mountain Elgon, mundu and Sera had two children; masaaba and kundu”, kundu moved south and ought to be the father of the basoga while masaaba is believed to be the founder of the basaaba lineage giving rising to the bagishu who were related to the luyha of Kenya but later separated in the 19th century but still believe there roots are still from mountain Elgon.