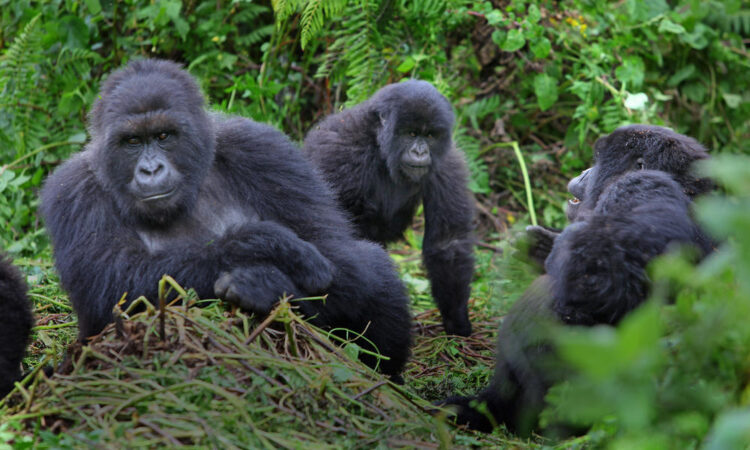 It’s important to note that number of families the park has, will increase or decrease depending on several factors (like poaching, new births, breakaways and many more) so below we highlight families that are currently in the park at this particular time.

Mubare was the first mountain gorilla family in Bwindi National Park and in Uganda to be habituated for mountain gorilla trekking purposes; the family was habituated in 1991 with Ruhondeza as the family’s silverback. The name Mubare comes from the Mubare hills where this family used to live at the time of habituation. Over the years because of reasons ranging from disease, poaching and other issues, members of this family have died including the first silverback and currently the members of this group are only 6, making it the smallest mountain gorilla group in Bwindi National Park.

Habiyanja is spilt from another family that was habituated around 1997. The silverback of this family used to have fights with another silverback Mwirima until one day they spilt each silverback forming its group. Rwansigazi the current family’s silverback retained most of the members from the original group and the group currently has 17 members.

This group has 20 members currently and are led by silverback Mwirma. It is the other part that spilt from Habiyanja and is led by Mwirima a brother to silverback Rwansigazi of Habiyanja. The name Rushegura came from the place where the two silverbacks split.

Nshongi is the group with the most members in Bwindi National Park making it the largest group in the park. The group has 25 members currently with 2 silverbacks.

Habituated around 2011 the family is led by silver Tibirikwata and currently has 17 members that live on the borders of two sectors in Bwindi National Park thus Ruhija and Buhoma.

This family is called Bitukura because they were first spotted along that river before they were habituated. The family has 12 members led by silver Ndahura. The family however unlike other families has other 3 silverbacks that live in the group.

The group is named after Mukiza who is the current silverback; he took over leadership after the death of Rukina. The group was originally part of Kayguliro family.

The family split from Mishaya family and currently boasts 9 members with one silverback Bweza.

This family currently has 13 members led by silverback Gwigi. The original number of the group though was bigger before Busingye split from it.

This family was habituated together Bukingi family. The family is led by silverback Bahati and the family has 9 members.

The family is led by Silverback safari who took over from the first silverback Nkuringo. The group currently has 18 members with two silverbacks. This group is the hardest to trek but one with the most exciting experience.

The family is a split from Nshongi family and currently has 12 members is led by silverback Mwine who took over after Mishaya’s death. The group is named Mishaya after the first silverback.

This group was formed after Mucunguzi the silverback attacked another gorilla family and ran away with some females that formed the group. Mucunguzi was originally in Bweza but he was troublesome so the silverback kicked him out of the family. Mucunguzi family has 8 members led by Mucunguzi.

Kutu family is a family with 8 members led by a silverback and they are found in Rushaga sector of Bwindi National Park.

This is a new family that has just been habituated and is ready for trekking. The group is named after its silverback that is called Christmas and the group has 9 members.

Binyindo family is also one of the new families and has 6 members and one silverback.