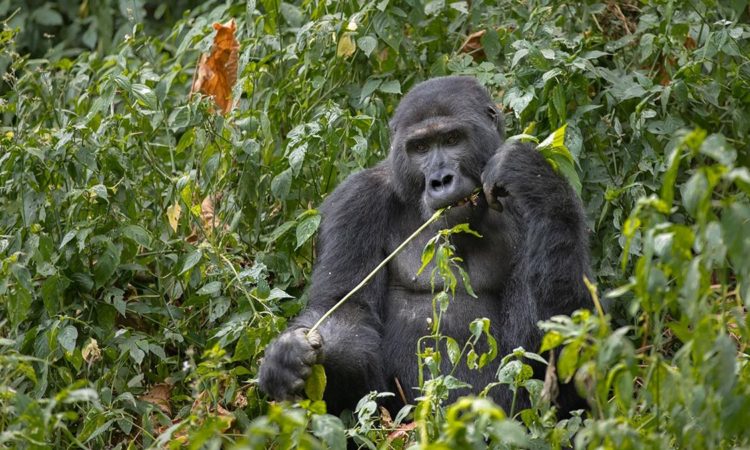 Mountain gorillas are the most sought after apes in Africa and they are visited by travellers all year round. These most visited apes, though popular they are one of the 25 most endangered primates according to IUCN and though conversation activities has been done of the years these famous primates still face a danger of being extinct from several issues that include but not limited to environmental altering events, diseases that kill these primates, humans encroaching on the animals habitats hence killing them among other things.

Mountain gorillas are herbivores feeding mainly on shoots, wild celery, roots, leaves, fruit, tree bark, bamboo and tree pulp: that’s why they are glued to the tropical forests because these forests have all this vegetation growing in them all year round. The mountain gorillas each in their groups and males are estimated to each about 18 kg of feed a day of course because of its massive body.

Some of the mountain gorilla features though not all also are uniquely structured for the mountain gorillas to adapt in their habitat which is tropical forests. They hands and feet are opposable; the hands help them in their movements as they move on knuckles as they walk through the forest and the feet help the mountain gorillas in climbing the trees in the forest.  Their hairy bodies keep their bodies warm and their body temperature regulated especially when its gets cold, which is literally every day because they live in high altitudes.

The mountain gorillas usually gather and feed during the mornings and evenings. The morning feeding is very important because they hydrate with the dew they get from the morning leaves; they don’t drink water from water bodies. The gorillas nap, rest or play during the day within their forested habitat and they make beds called nests from twigs and leaves which they during the nights. The adults will normally have their nests on the ground well as the young ones will have their in trees.

Plan to visit the mountain gorillas in their habitats across the three countries Uganda, Rwanda and the DRC at 700 USD, 1500 USD and 400 USD per a mountain gorilla trekking permit respectively.