Mountain Gorilla Trekking at Mgahinga : Mgahinga is found southwest of the country and is bordered by Rwanda and Congo. It is widely known as Mgahinga gorilla national park as it is famous for mountain gorillas. Mountain gorillas are extremely rare today and are found in only three countries; Rwanda, Uganda and Congo. At Mgahinga, the primates have plenty of natural food because of the thick rain forest which has variety of tree species and gorillas are known to be vegetarian. For this reason, some mountain gorillas migrate from Rwanda and Congo to come and have a feel of this food so plenty. “Though not in large numbers, gorillas of Mgahinga are easily seen in their natural habitats and this makes trekking much easier compared to other parks,” says the Uganda wildlife authority website. 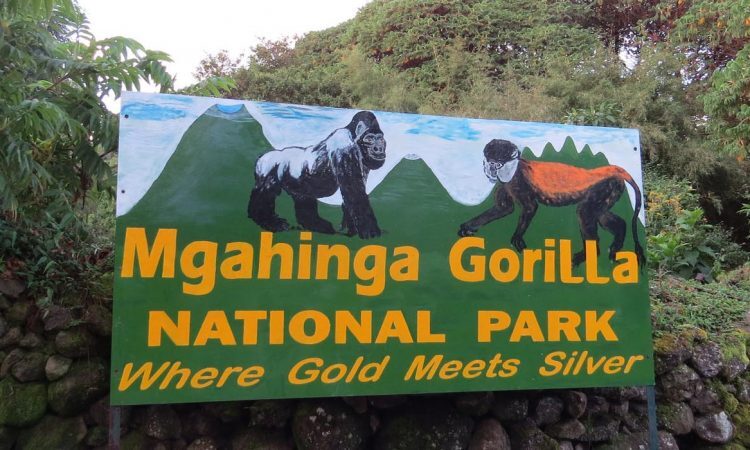 Gorilla trekking normally begins at 8:00am at ntebeko gate t and usually takes 2-4 hours. The maximum time to spend with the only gorilla family at Mgahinga is one hour, it is important to budget time well so as to maximize the opportunity. The number of people that can spend time with the Nyakagezi family is 8 people. This is because it is obviously one family and Mgahinga is generally a smaller park compared to its counterpart in the same business Bwindi. According to the Uganda wildlife authority website, the best time to do gorilla trekking is during the two dry seasons when the park is easily accessible. During these times, the paths are not muddy as in the rainy season. Those seasons are mid-December to end of February and June to October. It is however possible to gorilla trek throughout the year.

To get to the park one can use the road. From Kampala to Kisoro via Kabale is an 8 hour journey. You can also opt for air transport from Entebbe which is about one hour. When using air, you’ll land at Kisoro airstrip which is near the park. These flights must be booked in advance with your local safari operator. For accomodation, you can choose to stay at the various lodges around. Volcanoes mount gahinga lodge and amajambere camp in Ntebeko, Lake Mutanda Chameleone lodge in Mutanda, River Mucha and Kisoro Traveler’s rest Hotels in Kisoro among others, are some places where someone can stay after gorilla trekking.

Gorilla trekking at Mgahinga is a lot more adventurous than trekking at Bwindi in many aspects. As noted earlier, Mgahinga has only a family making it easier to trek. Bwindi has more than 35 gorilla families on the other hand. Having one family also makes Mgahinga less crowded which is advantageous to people that are introverted and love their privacy. Imagine only 8 people per hour! Whereas Bwindi has chimpanzees, Mgahinga has the endangered golden monkeys meaning one can hit two birds with one stone! Have both a gorilla and a golden monkey trek at once. Trekking in Mgahinga also gives visitors a hiking experience given the three volcanoes surrounding it. Trekkers can choose from Mountains Muhavura, Sabinyo or Gahinga to complete their experience. You get to see the beautiful view of the Mgahinga gorilla national park and an opportunity to spot the birds, other primates like the golden monkeys and different forest animals when you get to the top of any of these mountains.

To go gorilla trekking, one must acquire a trekking permit which costs $700 for non-East African citizens, $600 for foreign residents of East African countries and 250,000 Ugandan shillings for East Africans. It should be noted that there are no low season discounts or even discounts at all so don’t be misled. Accommodation costs range from $30- $3000 depending on one’s pocket.