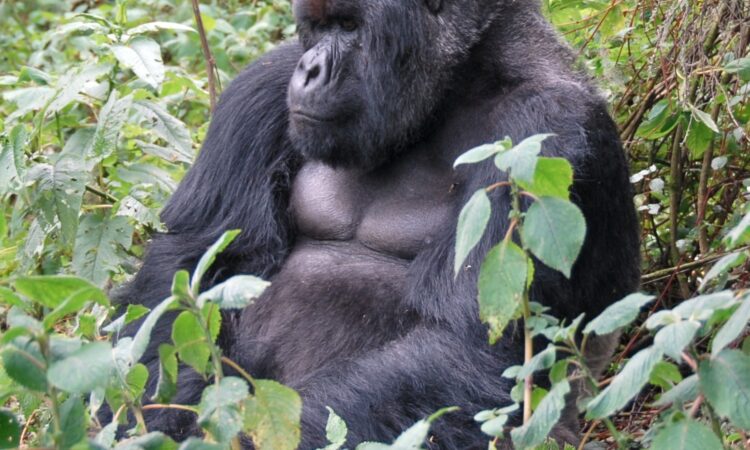 These Gorillas are very intelligent and are able to use several tools for various things; they are also gentle and generally peaceful unless disturbed or provoked. They are herbivorous animals and feed on trees, shoots and stems; they can also eat bark, roots, flowers and small invertebrates. Males can eat up to 34 kgs and females 18 kgs.

Mountain Gorillas live is close- knit cohesive families of about 5-30 individuals that are led by a dominant mature male known as a silverback. The silverback is the head of the group and decides where the group stays and eats as it also keeps peace and harmony within the group through mediating conflicts that arise in the group.

The silverback is also a protector of the group, fighting for his family to the point of death, in case of any attack to his family; some silverbacks have also learnt how to remove snares from the hands and feet of their group members. When it comes to eating, the silverback being the leader; always eats first.

Each Gorilla group normally has 2 sexually mature females that are bonded to the silverback for life; a Female Gorilla gives birth once in 4 years and has a gestation period of 8.5 months. Baby Gorillas are usually born with a weight of 1.4 – 1.8 kg but grow twice as fast as the humans, so they quickly gain weight; the female breastfeeds the infant up to 3 or 4 years and in that period the infant will stay with the mother. This helps to reduce Gorilla infant deaths that come as a result of diseases and accidents.

When the young ones have left the mother the males will reach maturity at 10 years, that’s when their black back starts turning into grey; and they live the group at 11years of age to walk alone or with other lone male Gorillas for about 2-5 years until it attracts a female or females to make its own group.  The females after leaving their mother will reach maturity at 6 and gradually leave at 8 to integrate into another established group or partner with a lone male to start a new group.

When two groups met the silverbacks are most likely to engage in a fight, where the winner or the stronger one takes over the other’s group.

Gorillas like to play with each other especially the infants and take a rest at midday which is a very important time for them to rejuvenate.

These animals are normally peaceful but when threatened they will charge at you and can become violent using their canines to cause deep gaping injuries that are can be fatal but its advised that in such cases when a Gorilla charges at you, stand your ground it will eventually turn back.

Gorillas hate rain and don’t like water; in fact they will only cross a water body when there is a dry log they can walk on without getting wet. They have also been found to be afraid of chameleons and caterpillars.

Gorillas and humans have a lot of similarities and when they meet there are high chances of disease cross- transmission from humans.

Mountain Gorillas are mainly preyed on by humans who poach them and leopards that kill and eat them.

Mountain Gorillas are listed on the IUCN Red list as critically endangered species since 1996, because their shrinking numbers due to the destruction of their habitats by humans, poaching still by humans and their slow reproduction yet almost 30% of baby Gorillas don’t make it to their first birthday due to disease and accidents.

Through the worldwide Fund, Mountain Gorilla conversation programs have run in the two habitats of the Gorillas (Bwindi Impenetrable national park in Uganda and Virunga mountains in Rwanda and DRC) since the 1990s and as of 2018 the number of mountain gorillas had grown to 1004 living mountain Gorillas. Conservation efforts still continue today with initiatives like Mountain Gorilla Habitat Preservation, strengthening policies and strategies against Gorilla poaching etc.

You can join the mountain gorilla conservation movement or just take a trip to see these great apes in their elements as you visit their habitats in Uganda, Rwanda and the Democratic republic of Congo.