Musanze caves, is  found in Musanze the largest district which is within the region of north province of Rwanda, the capital of Ruhengeri also commonly known as Musanze ,it’s the center for tourism in Rwanda . 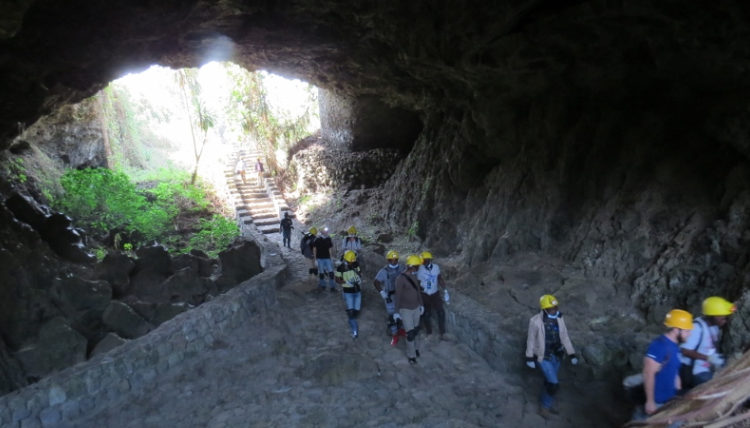 The volcanoes National park which is located   in the mountainous regions of Rwanda, there are dense vegetations which are famous for mountain Gorillas and Golden monkeys. The town is most visited district in Rwanda with components in order to makes sure.

Rwanda has more components which always assure an extra ordinary holiday adventure. Musanze ,is the largest part of the gigantic   volcanoes National park, which is also a home to five volcanoes in the Virunga, these  include Bisoe, Sabyinyo, Muhabura, Gahinga, Karisimbi,the volcanoes is an amazing peak to view however one can enjoy amazing sceneries in this area.

The Ruhengeri   are also known as Musanze caves these are geological treat. The caves are 2km covered in lush greenery; it’s also a home for bats.

If one doesn’t feel like entering inside the cave, they can visit the beautiful vegetation around these caves which makes good picture and good experience.

One can as well as canoe in the river near the mountain Gorillas as you see how they play, groom, feed, swing on trees and many more to see during your Gorilla trekking session.

The water is still tranquil, view the amazing sceneries fantastic Rwandan country side and wildlife in the region.

The Museum is where one  can visit and honor the Rwanda’s past history, musanze is one of the best place to visit ,the breathtaking views  are a life time opportunities to offer.

The Kinigi sector is located in Musanze district this is extremely benefited from   Musanze caves attracting a number of visitors in the area.

The caves are adventurous    these include something especially in the first person, the main two attractions are open in Rwanda becoming favorite items, there hidden gems very peaceful, refreshing, charming.

It’s a short distance from Musanze ,Rwanda’s main way to the mountain Gorillas, the caves were formed million years ago in eruption.

Musanze caves are supposed to be visited in Rwanda.

There is a big number of accommodation in Musanza caves, the caves  are among the Albertine Rift Valley, two kilometers ,with a number of over 32 entrances.