Muzinga Square Park Entebbe is one of the symbols that represent Entebbe .it also stands as a recreational park as well as a symbol of a milestone which is within the center of Entebbe town. Muzinga is derived from a local word in English it means Canon. 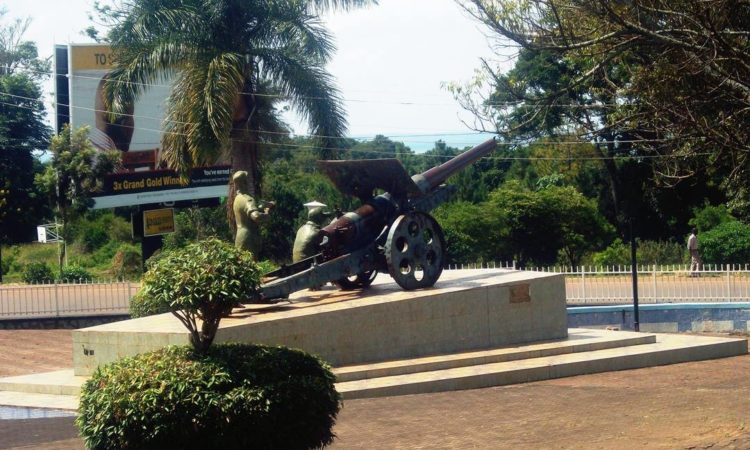 Muzinga Square Park is located close to the state house of Entebbe. The Muzinga has is a lot of history which is attached to this monument.

Muzinga Square Park is a historical and tourist information monument, its one of the most historical attraction in Entebbe.

The square is located opposite the Entebbe Municipal council building, it is said that the monument was left behind by the Tanzanian troops this was during their up rise on the former president of Idi Amin Dada.

After the troops ousting president Amin, they wanted to blow up the Entebbe Municipal council building but were discouraged by gunfire from Uganda troops who were on the verge of being defeated; this made them to abandon their plan.

The Tanzania troop abandoned their plan as well as their cannon till today it stands. The canon is the main statue that makes the Muzinga square park. The canon is revolved into a tourist attraction with 2 soldier statutes that are constructed next; this commemorates the occurrence of that day.

The canon statutes park has a number of chairs where tourists can sit to enjoy the amazing scenary; it’s as well accessible by the public at almost every hour of the day to relax while one enjoys the panoramic views of Entebbe town.

Muzinga Square Park is located in the same town with the international Airport of Uganda, making it easy for foreign tourists to access the park. The Muzinga square park Monument commemorates the victory of Tanzanian troops over President Idi  Amin Dada.