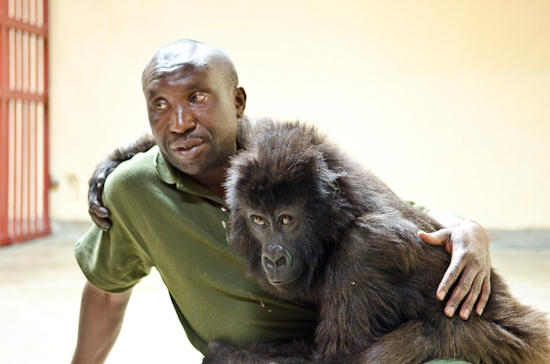 Ndakasi rose to fame in 2019 when together with another gorilla Ndeze  posed for a selfie with ranger, Ndakasi’s posed is said to have been so poised and relaxed it went viral all over social media platforms and even made international news. The ranger Mathieu Shamavu, posted the photo on instagram it immediately caught several people’s attention causing it to go viral within hours.

The Viral photo shows the ranger who is in a T-shirt and two mountain gorillas behind him one looking over his shoulder and the peeing towards the camera and another ranger behind staring at the scene in amazement.

To announce Ndakasi’s death Virunga released photos of the gorilla with a ranger Andre Bauma followed by a statement that read in part, “It is with heartfelt sadness that Virunga announces the death of a beloved orphaned mountain gorilla, Ndakasi, who had been under the care of the park’s Senkwekwe Center for more than a decade.”

The statement continued stating that Ndakasi died on 26th Sept after a long illness that had caused her health to rapidly deteriorate in the past months and eventually led to her unfortunate death. “Ndakasi took her final breath in the loving arms of her caretaker and lifelong friend, Andre Bauma,” Virunga remarked.

The ranger Andre Bauma who is also the manager of the Senkwekwe Center – the mountain gorilla orphanage in Virunga where Ndakasi has lived her whole life says he met Ndakasi in 2007 at 2 months old and has been with her all through her life. In 2007 Ndakasi was found in the wild clinging to her dead mother, who had been killed by militia together with Ndakasi’s father and family; Ndakasi was 2 months old.

Ndakasi was then taken to the gorilla orphanage where she was raised for all her 14 years of life. The rangers, who found Ndakasi, felt Ndakasi would be safer in at the orphanage because she had no relatives and at 2 month old couldn’t really survive in the wild hence the decision to keep her at the orphanage.

Ndakasi was born in to Kabirizi, one of the gorilla families in Virunga National park which is part of the Virunga conservational area that cut across the Democratic republic of Congo, Rwanda and Uganda. 2 months after Ndakasi’s birth, armed militia gunned down her parents and other family members. Following the death of these gorilla Virunga National park beefed security at the park and Senkwekwe Center was created inside the park to care for orphaned gorillas in the park.

A documentary made in 2014 titled Virunga featured the orphaned gorillas and Mr. Bauma the manager of the orphanage who had grown a close bond with Ndakasi. They played together and moved together like father and daughter. In fact in Mr. Buama’s words he said he was like Ndakasi’s mother he fed her and played with her just like a child.

On the death of Ndakasi Mr. Buama said in a statement “It was a privilege to support and care for such a loving creature. It was Ndakasi’s sweet nature and intelligence that helped me to understand the connection between humans and great apes and why we should do everything in our power to protect them.”

“I loved her like a child and her cheerful personality brought a smile to my face every time I interacted with her,” the statement continued.

Bauma said he was proud to have called Ndakasi a friend.