Nyero Rock Paintings are historical marks over ten thousand years old branded on rocks believed to be in existence since 1250 AD. The paintings have been presented many times in different exhibitions and are century-winning art facts. These marks are physical facts to the myths told about the origin of mankind. The paintings are proof of the civilized people who lived before present-day modernity. Located in Eastern Uganda in the Kumi district. 8km west of Kumi town this is about 250km from the capital city of Kampala. The paintings at Nyero have similarities with other paintings around Africa which answers some of the archeological questions of the existence of early man. 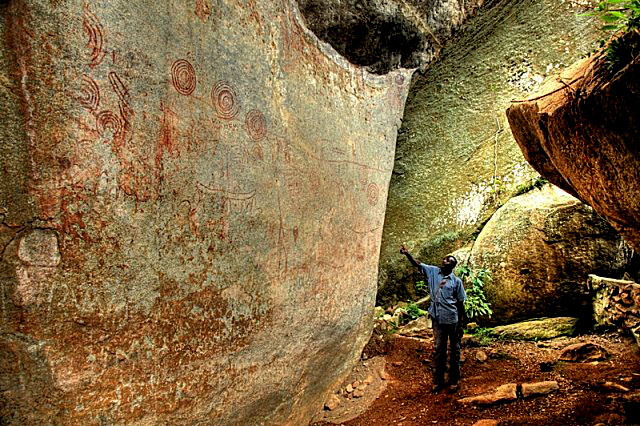 First documented in the Teso Report in 1913, the geometric paintings are on the tentative list of UNESCO World Heritage sites. The artwork was first linked to the San or Bushmen, the original occupants of South Africa but after enough research evidence has approved them to by the Batwa people. The archaeological, genetic, and ethnographic structure of these unique paintings belongs to the ancestors of the Batwa people. Recent studies confirm that the paintings were painted by settled human groups of people as opposed to the nomadic nature of the San because they were both fruit hunters and hunters. The Batwa people lived in communities in forests and caves. It’s believed the Twa were displaced by the new ethnic groups that entered East Africa including the Luo and Bantu because these were more powerful than them. Currently, the Batwa reside at the Uganda-Rwanda border and in the garama rock cave in southwestern Uganda. Generally situated away from the flat surface and require climbing and hiking.

At Nyero 1, a small rock shelter supported with other rocks, it constitutes six sets of concentric with a central image in an acacia pod shape all in white paint.

At Nyero 2, this is the main shelter at Nyero comprising of over 40 images and concentric circles, all in red paint. It is made of a 10-meter high rock supported by a large boulder. The paintings are protected by direct sunlight by the sides rocks and the overhead rock protects it from direct rainfall which it has preserved the paintings from wearing off.

At Nyero 3, this is an 8-minute walk from the second shelter found on the north side of the Nyero inselberg. The painting here is in white with concentric circles encompassing by double curved designs which are divided into compartments.   It is an enormous boulder placed on supporting rocks and there isn’t space for standing upright at this stage.

At Nyero 4, found on the western side of the hill. At this stage, there are some conical shapes and finger-painted concentric circles in red paint.

At Nyero 5, also found on the western end. The paintings aren’t very visible due to erosion but this stage is compromised of a combination of circular and linear shapes made with both a brush and finger.

At Nyero 6, found at the hilltop this stage has the best view of the entire landscape. Compromised of small oval shapes, slanting L shape, and an outlined cross with a circle below, all in red ink. The paintings are obsolete and had to seen because they were exposed to sunshine and rainfall.

The sites are sacred places where different cultural rituals take place including rain ceremonies. It’s a very epic experience any tourist shouldn’t miss on their visit to the pearl of Africa.