Places to visit in Uganda 2022 : The country was named the pearl of Africa for very good reasons-Uganda has countless number of attractions. The hospitality of the Ugandan people is unmatched, the wildlife is a force to reckon with, the forests are nothing less than perfection and the culture is more than diverse. The pearl of Africa is in all her corners effortlessly beautiful. Here are some of the most benevolent places to visit while in Uganda. 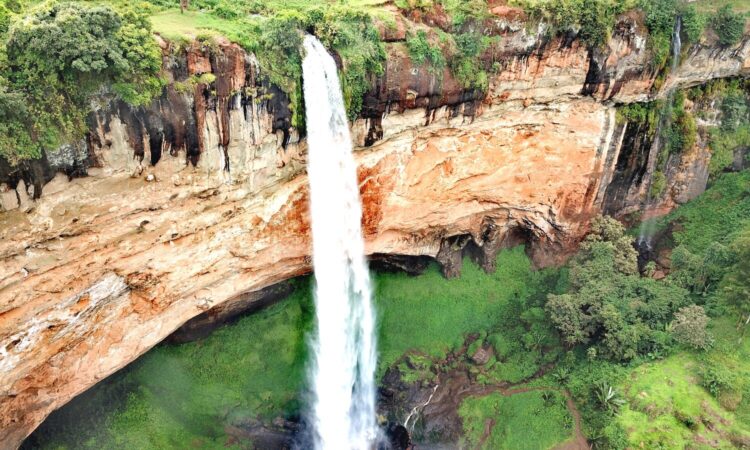 Located in south western Uganda, 474.1 kilometres from Kampala, Bwindi is a home to over 400 mountain gorillas, a number more than half of the remaining gorillas of the world. This makes Bwindi a top travel destination in the country. In fact, thousands of tourists come to Bwindi to participate in the gorilla trekking activity each year.

While trekking gorillas, visitors are exposed to other primates like the L’hoest monkeys, about 360 bird species and 200 species of butterflies. No wonder Bwindi was named a UNESCO heritage site.

Like Bwindi, Mgahinga National Park is located in the south western part of the country. Mgahinga however has one family of gorillas as compared to the 12 in Bwindi which means less visitors at a time. The best thing about Mgahinga? She is the sole home of golden monkeys in the country.

More to mgahinga is the cultural significance the forest holds. For many years, the Batwa people also known as the hunter-gatherers lived in this forest and are therefore its most knowledgeable people. They now lead visitors into the forest as the tourists learn more about their heritage and survival in the forests on a walk dubbed the batwa trail.

The name “Gahinga” is a local word known to mean a pile of volcanic stones. Mgahinga national park is characterised by three extinct volcanoes which can be trekked. Mountains Gahinga, Sabinyo and Muhavura are all part of the Virunga range that is along the borders of Uganda, Rwanda and the Democratic Republic of Congo. This means that a climb to any of them gives you a glimpse into two or three countries and so many other spectacular sights.

Known for having the highest concentration of chimpanzees in the country, Kibale National Park is one of the devoured tourism sites in the country. It is also one of the fondest research sites on the continent having people do research on the forest’s fish species, ecosystems, chimpanzees and other primates among others. The most recently discovered primate species is the dwarf galago taking the total number of primate species in Kibale from 12 to 13 out of the 20 found all around the country. Other primate species in Kibale include the olive baboon, red tail monkeys and the black and white colombus among others. The forest also boasts of over 375 bird species and a very beautiful scenery thus Places to visit in Uganda 2022..

Known as the country’s capital by most people, Kampala is also the capital of Buganda, the biggest tribe of the land. Kampala’s vibrant life daily cannot go unnoticed- from the town traffic to the markets and beyond. The various attractions in the city make it spectacular. Visit the Kasubi tombs where fallen Buganda kings are buried, Ndere centre the hub of Ugandan culture, the Buganda headquarters in Mengo, the Rubaga and Namirembe cathedrals. Do not miss out on a tour to Owino market, the largest in East Africa for a real African feeling and a taste of the amazing street food.

You cannot talk Uganda and not mention the adrenaline capital of East Africa. With her unique attractions and many activities to participate in, most tourists cannot resist the urge to visit Jinja when in Uganda. Most visitors are attracted to the source of the Nile on Lake Victoria. The Nile happens to be the world’s longest river starting in Jinja Uganda and ending in Egypt, pouring its waters into the Mediterranean Sea.

If you love an adrenaline rush, activities like mountain biking, quad biking, kayaking, white water rafting and water tubing will absolutely take you to Jinja. Oh! Do not forget to taste the amazing chapati or rolex while you are there.

Uganda is one of few countries that has the equator crossing it. This means that while in Uganda, you have the opportunity to be in both the north and southern hemisphere at the same time while at the equator. You can be at the equator in Entebbe, Queen Elizabeth National Park and along the Kampala-Masaka Road where equator markers are located.

These serene falls border Mountain Elgon National Park in Eastern Uganda. It is a popular attraction for its quietness and spectacular views from each angle. Taking nature walks at the sipi falls is priceless as you will find caves, beautiful coffee plantations and views of hills and water falling from the rocks all around. If you are not acrophobic, a hike to the top of Sipi falls is worth the trip.

For people that love great hikes, Uganda still does not fall short of mountains and hills for the activity. The best mountains for a long hike are Rwenzori that also borders the Democratic Republic of Congo and Elgon which borders Kenya. For shorter hikes, the 3 Virunga mountains; Sabinyo, Gahinga and Muhavura are the best option. Shorter hikes take six hours to day whereas longer ones can even take more than a week.