Primate tours in Uganda : Uganda, the pearl of Africa is the country with the most concentration of primates in Africa. She is home to 20 primate species that include mountain gorillas in Bwindi National Park and Mgahinga National Park, chimpanzees in Kibale National Park – Kibale is also home to 13 primate species hence the name primate capital. 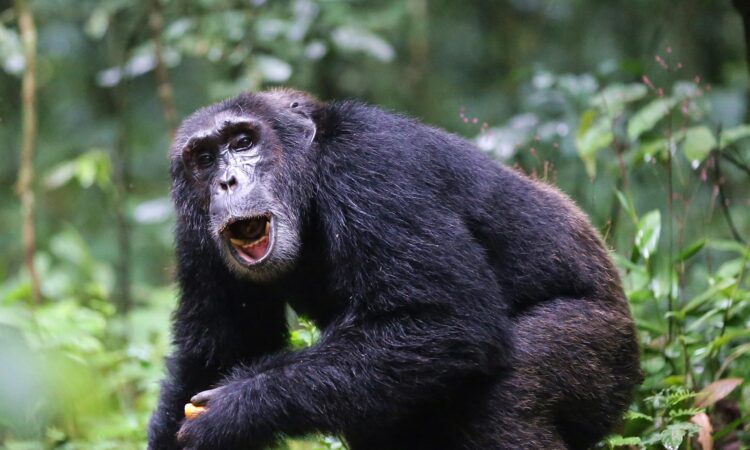 The most popular of the 20 species in Uganda are the mountain gorillas, chimpanzees and the golden monkeys all considered endangered species. With this concentration of primates in Uganda, various people from all over the world come each year to trek these amazing creatures.

Done in Bwindi National Park and Mgahinga National Park, mountain gorilla trekking is the most famous primate tour in Uganda. Mountain gorillas are found in high altitude forests that are near mountains and in Uganda, Rwanda and DR Congo, the Virunga mountains. Bwindi has the highest concentration of mountain gorillas with about 400 of the 880 that are remaining in the world. The 400 gorillas are divided into about 12 habituated families and are available for trekking each day of the year. Mgahinga has only one habituated family which is also available for trekking daily.

When trekking gorillas, tourists are divided into groups of 8 and are assigned a family of gorillas to trek. This activity takes 5 to 9 hours depending on when you find the family you’re trekking and are allowed one hour with them once found. Mgahinga park can only have one group of 8 at a time compared to Bwindi which can host about twelve groups so if you’re all for privacy, Mgahinga is the park for you.

Gorilla trekking permits are only sold at the Uganda Wildlife Authority in advance at $700 per person for both parks and you must be over the age of 15 to go gorilla trekking. Please note that discounted permits for low seasons are no longer on sell.

Chimpanzees are the second most famous primates in Uganda after the mountain gorillas. With over 5000 habituated chimpanzees in Uganda, one can guess that they spread across many forests. They can be found in Kibale, Budongo, Kyambura and Kalinzu which is a habitat to over 1500 chimpanzees.

Because of the concentrated number of chimpanzees in Kibale National Park, it is easier and time saving to trek them there than anywhere else. You can also trek chimpanzees twice a day in Kibale and that is at 7am and 12pm with 6 groups of 6 people each trekking each day.

Sighting chimpanzes in other places they are found is harder but things like scenery are amazing. The Kalinzu forest has flowing streams and Kyambura has other animals like hippos and elephants and you could spot a lion rarely.

When going for chimpanzee trekking in Kibale National Park, you will need a trekking permit booked from Uganda Wildlife Authority in advance before the trip which cost $150 per person in peak seasons and $100 in low seasons. In Budongo however, you can inform the park rangers a day before your trek for a permit.

Only done in Mgahinga National Park, golden monkey trekking is a primate tour one ought not to miss. Golden monkeys are only found on the slopes of the Virunga Mountains in Uganda, Rwanda and DR Congo; they have an orange-goldish color on the back hence their name. Golden monkeys live in groups of about 30 individuals and their fast movements in the forest makes trekking them an active tour.

As the other primates, you can only spend one hour with the golden monkeys after finding them which takes about 2 hours. A permit can be obtained from your travel agency which costs $60 – $100.