Primates in Nyungwe National Park are what make the park very interesting as travelers come to do activities like Chimpanzee Trekking and Monkey trekking. Nyungwe National Park is one of the 3 National Parks in Rwanda that is famously known for the great ancient Nyungwe rain forest, being home to numerous primates species, the canopy walk and hiking experiences to the waterfall. This park that is located in the south western part of Rwanda is normally visited by travellers from across the world excited to engage in the different activities the park offers especially primate trekking. On primate trekking experiences travellers take hiking walks or climb into the prehistoric Nyungwe rain forest to find different primates and spend at least an hour watching them and interacting with them. 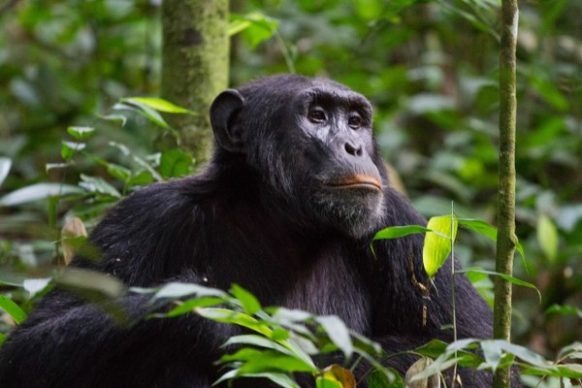 Most travellers as they plan to take on these primate trekking experiences in Nyungwe National Park, they will have questions like how many primates’ species are in the forest? How do they look like? What are their different characteristics? Among other questions. So below we are going to give you some detailed information about some of the primates in Nyungwe forest.

Nyungwe forest is known to be a habitat for 13 primate species however in the article below we are going to look the top 7 most seen primates in the Nyungwe forest.

Chimpanzees have a bare brownish face, toes and fingers with the rest of its body covered with black hair. These primates live in groups of 15 to 150 members that are mainly females and infants led by a dominant male but on your trekking experience, you can find members of a group moving alone or in smaller groups.

Chimpanzees normally feed on fruits, leaves bark, seeds, honey, flowers,  insects and in some cases meat from small antelopes or monkeys. The females give birth to one child every 5 years and they are pregnant for 8 months. After a child is birthed, it stays close to the mother for years even after weaning.

The chimpanzee is among the animals listed on the IUCN red list as an endangered animal; its population has greatly decreased mainly due to poaching and distractions of its habitat.

Trekking the chimpanzees in Nyungwe National Park is at a fee of 90USD.

Grey checked Mangabey: This is an ancient monkey that can be mistaken for a small hairy baboon though it actually has brown fur all over its body with some golden color around its neck. Because of its size and elusiveness, the monkey is hard to identify in the forest; normally you need someone who knows the monkey to identify it for you. These primates live in groups of 30 members and each member has equal rights; though the males live their native groups at puberty age to go find females and join other groups. The grey-cheeked mangabeys mainly feed on figs, flowers, fruits, shoots, and insects. In Nyungwe National Park these monkeys are not trekked on a special fee but can be seen on your chimpanzee trekking experience.

Red tailed monkeys: Red tailed monkeys are unique monkeys with distinctive red tails though their body color varies between orange, black and red. Though these monkeys are found in forests, research has shown that they can actually survive in any place with fruits, leaves, shrubs, insects and flowers. This monkey is endangered but can be seen in the Nyungwe forest on your chimpanzee trekking experience.

L’hoest monkeys: This unique and rare monkey is a mountain monkey and mostly survives in forested mountainous areas. They have an outstanding white beard that you cannot miss and a dark coat that is used to identify it. Unlike some other primates, these monkeys live in female-led groups of up to 20 or 30 members. Not so much is known about these monkeys but you can see them in Nyungwe forest on your chimpanzee trekking experience.

Owl-faced monkeys: This monkey is also known as the Hamlyn’s monkey and is part of the old world monkey species. This monkey is rare and stays mainly in bamboo and rainforest, travels on the ground and normally awake at night. Apart from that not so much is known about this monkey but can be spotted in the Nyungwe forest on your chimpanzee trekking experience.

White colobus: They are divided into white and black colobus but the nyungwe forest has only white colobus. These monkeys are part of the old world monkeys’ species. Like other primates, the monkeys feed on leaves, flowers, and fruits mainly. The monkeys too can be spotted in Nyungwe forest on your chimpanzee trekking experience.

Vervet monkeys: This monkey too is from the old world monkey species. The monkeys are grey bodied with black faces and live primarily in forested mountains and feed on fruits, leaves and flowers.