Primates, commonly known man-like mammals, is a class of eutherian animals. These are mammals of an order whose members are born completely developed and typically attached to the mother’s placenta. They are biologically from the Animalia kingdom and Mammalia class.  Primates represent one of East Africa’s best studied taxonomic groups of mammals. A total of approximately 38 species and 47 subspecies of primates are found in East Africa having Tanzania with the largest number, followed by Uganda, Kenya, Rwanda and Burundi respectively. Examples of primates include; humans, chimpanzees, golden monkeys, baboons, lemurs, mountain gorillas and many others 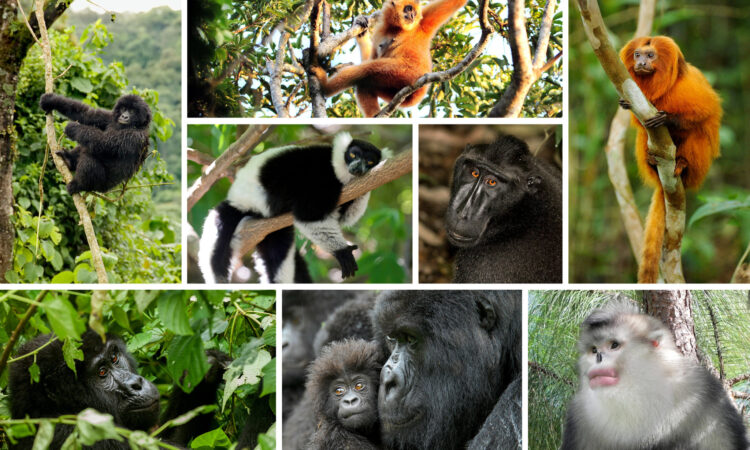 Mountain gorillas are an endangered species of primates that live in mountainous tropical regions. There are two populations of mountain gorillas left in the whole world. One of these populations are found in the Virunga volcanic mountains and they are shared amongst three countries and national parks and these are the Mgahinga found in the Southwestern region of Uganda and the Virunga National Park found in both Rwanda and the democratic Republic of Congo. Mountain gorillas become adults at the age of 8 years and from the age of 8 to 12 they are known as blackbacks. Their gestation period is about 8.5 months and it also takes two years for them to give birth to another offspring. They are individually identified by the nose prints which are unique from each other. They are non-territorial and they have strong relationships amongst themselves. However the female’s relationships are relatively weak. Mountain gorillas are herbivorous and they eat roots, fruits, wild celery, tree bark and pulp.

Gorilla trekking is an activity that involves hiking in the wild/forest in search for given habituated gorilla families. This activity is done in Uganda, Rwanda and Democratic Republic of Congo. The peek season for gorilla trekking is July and August with long rains and from March to May there are the short rains. This activity requires a tourist to first get a permit which enables the allowance to go into the gorilla territories. In Uganda gorilla trekking permit can go for $700 for the foreign non East African residents. The tourists must be 15 years and above to do this activity. These permits are issued by the Uganda Wildlife Authority or one can book a permit through a tour company. Some of the rules and regulations during gorilla trekking are that the gorillas live ten meters from the human settlements to prevent human diseases attacking these animals other regulations include no leaving or dumping rubbish during the hike or the trekking, no touching the gorillas and incase a tourist is sick with a cold or flu or any diseases that can easily be contracted they aren’t allowed to go trekking because the gorillas could catch it and fall sick or even die.

While mountain gorillas are primarily found in Bwindi National park, Chimpanzees on the other hand are found in a couple of different forests in Uganda with multiple destinations including Kibale forest found south-western Uganda, Budongo forest located in the Murchison Falls National Park and Kyambura Gorge in Queen Elizabeth national park. Uganda is, plausibly, the best country in East Africa to see the chimpanzees. Eastern chimpanzees are currently estimated to be at least 150,000 individuals with Uganda habituating over 5,000 individuals. A chimpanzee spends most time on the ground but usually sleeps in a selected tree, where it builds a nest for the night. Chimpanzees live in communities of approximately 20 to 150 members, but spend most of their time traveling in small parties of just a few individual chimpanzees. When confronted by a predator, chimpanzees will react with loud screams and use any object they can get to protect themselves against the predators. It is in Mgahinga that you will enjoy the coordinated and peaceful stay of mountain gorillas together with chimpanzees and golden monkeys.