River Sezibwa : One of Buganda’s most treasured rivers because of its spiritual value to the kingdom. River Ssezibwa is situated in the central area of the great lakes region. Located 32km on road from Uganda’s capital, Kampala. River Ssezibwa is a 150km long river with the famous Ssezibwa falls. 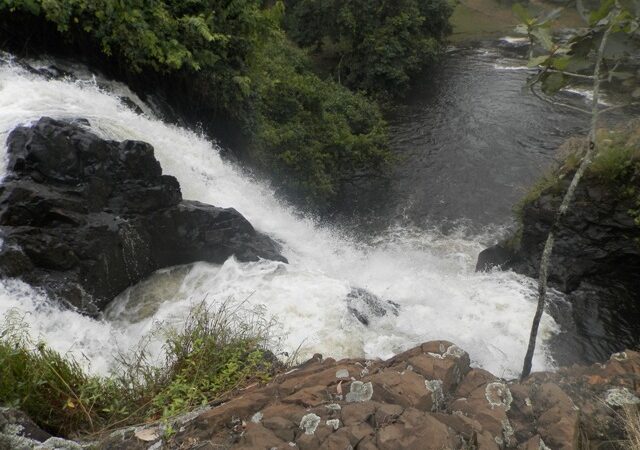 The source of River Ssezibwa is located in the Buikwe district near the town of Ngogwe . It originates from the wetlands between Lake Victoria and pours its waters in Lake Kyoga. It flows through Mukono district before it pours water in Lake Kyoga in Kayunga distict..

According to the folktales told by the Baganda, its said that the two rivers are an natural occurrence but rather were given birth to. Ssezibwa and his brother Bwanda were produced by their mother on her way to Kavuma Bukunja.The lady identified as  Nakkungu Tebatuusa,whose husband was Nsubuga Sebwaato , were blessed with twins inform of water, where Ssezibwa flew west, passing many obstacles  which didn’t stop it ,giving rise to its name, which was obtained from a Luganda phrase ‘’siibwa kkubo’’ meaning that ‘’my path can’t be blocked’’, on the otherhand,Bwanda flew east words, towards Nyenga. Ssezibwa is believed faced by many obstacles while on his course but he is believed to have maneuvered with the help of Nnalongo Kkubo. And this area is believed to be a supernatural place by a lot of people. Due to this legend, giving birth to twins is considered a blessing in Buganda.

The River also incorporates a spectacular waterfall, the Ssezibwa falls, currently one of the most visited falls. This Ugandan hidden cultural fortune comprises of beautiful views of the sharp-edged rocks and gashing sounds of water forcing their way through the indented rocks. With a height of up to 7metres, the   falls have also tremendous scenery, great ambience is a relaxation base, as you enjoy the beautiful the birds humming. One can glance at all this beauty seen as one stands on the bridge. At the falls, you will be sure to notice so many shrines, a destination where many people come to worship, taking part in cultural rituals at the top of the falls, as they believe that the stunning falls have supernatural powers, also a connection to their ancestors, blessing zone for many more good things. The prominent shrine ‘’ Mbuga ya Musoke’’ where its believed to have a resident python referred to as Nalongo with a company of a traditional healer has ceremonies intended for those searching for love, children, business success  and good harvest.

These falls are great destinations for bird lovers, as you will get to explore the stunning common and rare species of birds  you can spot right at the adjacent gardens. The birds you can look forward to  seeing  include, the rare African fin foot ; a bird that was only spotted in Lake Mburo national game park, giant kingfisher, crowned hornbill, Nogrey-headed headed sparrow, Ross’s turaco, green Hylia among others, its surely a rich birding spot for the birders. And Ssezibwa doesn’t exclude you too from seeing some animals: red tailed monkeys, vervet monkeys, tree squirrel, Nile monitor Liard, green mambas and horned adders.

Its close nature to Lake Victoria offers you an extended tour experience to the source of the Nile where you will enjoy a lot more, boat cruises, white water rafting, bungee jumping and many more.

Rock climbing is also now a thing at the falls, where you will get a chance to experience some interesting rock climbing. Other activities that will ring a bell at the falls include well guided nature walks, camping experiences and taking community walks.