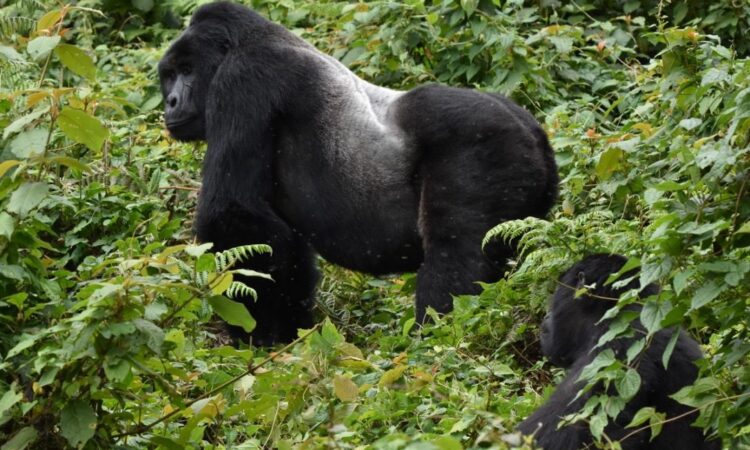 From the Uganda wildlife Authority reports, it was stated the different members of the group were delighted at the arrival of this new baby and that the infants and juveniles of the group were seen fighting to have a glance at this young who was guarded by the group’s current silverback Ndahura. The mother gorilla as expected is well and spending most of her time nursing and caring for this new baby.

The Bitukura group has suffered defections in the past year and that has greatly affected the group numbers so the arrival of this baby gorilla is such a great boast to the group’s numbers. The defections saw the group loose its then silverback Rukara and the rise of the group’s current silverback Ndahura who is leading the group of females and infants. The arrival of this baby gorilla is said to also have boasted the spirits of the other group members in the midst of the wet weather that has been greatly evident in this season.

Bitukura mountain gorilla family usually nests in the Bugarama areas of the Ruhija sector and that’s where the current silverback Ndahura resides. The group is one of the recently habituated mountain gorilla families. At the time of its habituation the group had four silverbacks with Rukara being the dominant; with the other silverbacks/black backs being Ndahura, Rukumu, Mugisha and Obia. The group then had a total number of 13 members but 3 to 4 members have defected the group since then and as stated above the family has gotten a new baby. Meaning the total number of members is now about 10 or 11.

The Ruhija sector is quite calm compared to the other sectors in the park and usually offers its trekkers a secluded mountain gorilla trekking experience. A trekking experience in this sector gives you a chance to experience one of the three families in the sector as you enjoy the beauty of the surrounding views of the virunga massifs.

The mountain gorilla trekking permits in Uganda usually go for 700 USD for foreigners non – residents but are currently on a discount until 31st July 2021.